Unlike slotted single-mode lasers, which use a single grating with a large free-spectral range (FSR), these widely tunable devices use a pair of very high order gratings (with a much narrower FSR) to form a cavity. Using the 2D scattering matrix method (SMM), the reflectivity spectra of a given grating can be generated. The two gratings have a slight difference in period and as such, FSR, allowing lasing to occur only where the Bragg peaks overlap. 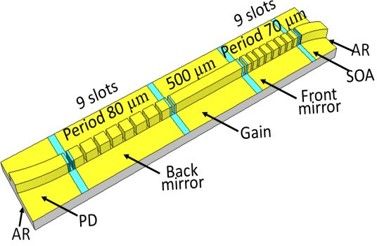 The Vernier effect is observed by inciting an offset in refractive index (via current injection) in one grating with respect to the other, which causes the lasing wavelength to hop to an adjacent super-mode due to a new set of peaks overlapping. This allows for discontinuous wavelength tuning from 1520 to 1580 nm covering the entirety of the C-band, with a side mode suppression ratio (SMSR) exceeding 40 dB.

The tuning map obtained from such a device consists of a number of features. As is the case with the single-mode lasers, the intra-mode wavelength drifts red in response to any injection current above threshold and cavity-mode hops (~0.35 nm) occur due to drifting longitudinal modes relative to the Bragg peak. In addition, the aforementioned super-modes hops (3-4 nm) occur due to offset in the gratings. The primary super-mode tuning regime is a red-shifting due to quadratic thermal effects, however a blue-shift can be seen at lower currents (the bending of the mode boundaries), as a result of carrier effects yet to be saturated.