Spintronics or spin electronics is the marriage of electronics which is based on the manipulation of charge of the electron and magnetism where the intrinsic spin of the electron plays the main role. The goal of spintronics is to develop devices that exploit electron spin to create new functionalities. The spintronic dream includes universal memory, THz data transfer speeds and electronics with ultra-low power consumption. Unlike charge, spin is not conserved in some scattering events, with about one in 100 events causing spin flip. Hence for spintronic devices, thin magnetic films are required (1 - 20 nm thick). One of the key features of spintronic materials is spin polarisation.

Where Dup and Ddown are the densities of spin-up and spin-down states at Fermi level, respectively. 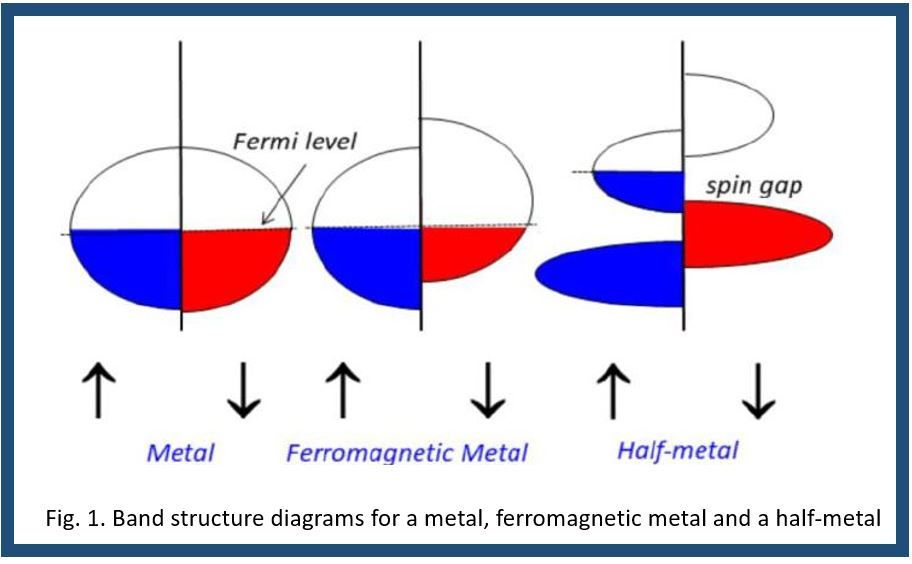 For a non-magnetic metal, the conduction bands are the same for spin-up and spin-down electrons. Hence the current passing through has no spin polarisation at zero field, i.e. P = 0. In ferromagnetic materials the spin-up and spin-down are exchange split due to Coulomb interaction, hence depending on the material the current emerging from it will be to some degree spin polarised, i.e. 0 < P < 1. There is also a very interesting class of materials called half-metals. Here there exists a spin gap in the band structure and if the Fermi level is located in the spin gap, 100% spin polarisation can be achieved, i.e. P = 1 at T = 0 K in materials with no SOI. In practice the current emerging from a half-metal is not fully spin polarised but it is to a very high degree and such materials are desirable in spintronic devices.

In 1995, a class of magnetic material was envisaged by van Leuken and de Groot, which they called a 'half-metallic antiferromagnet' [1]. Like a half metallic ferromagnet [2], it was supposed to be fully spin polarized with a spin gap so that electrons of only one spin are present at the Fermi level, but at the same time it would behave magnetically like an antiferromagnet with compensated magnetisation in the ground state. Such materials are insensitive to external fields and demagnetizing effects, yet electronically they resemble a perfect spin-polarized ferromagnetic metal. However, the material is not a true antiferromagnet because the two sublattices are crystallographically inequivalent; It is a ferrimagnet and the sublattices generally have different temperature dependences [3]. Compensation of the ferrimagnetic zero-moment half metal (ZMHM) will only occur at a specific temperature Tcomp The first experimental example of a ZMHM was discovered much later, by Kurt et al [4], based on electron count in Heusler alloy structures [5]. The compound Mn2RuxGa (MRG) has two equal and oppositely directed but crystallographically-inequivalent, manganese sublattices.

The crystal has an inverted L21 structure as shown in Fig.2. The Mn atoms at the 4a and 4c sites form the two sublattices that are responsible for the magnetism of the material. The moments of each sublattice have different temperature dependences, with the Mn4a moment remaining roughly constant up to room temperature and the Mn4c moment decreasing with increasing temperature [6]. This leads to compensation of the net moment at Tcomp where the moments are equal in magnitude, but opposite in direction. The temperature can be tuned by changing the concentration of Ru, where lower Ru concentration causes a lower Tcomp, but also by substrate induced strain or the presence of Ga antisites [7]. Films of MRG grown on MgO (100) substrates exhibit perpendicular magnetic anisotropy (PMA) due to a small 1 % tetragonal elongation induced by biaxial substrate-induced strain. The electronic band structure exhibits a spin gap and it is the 4c sublattice that predominantly contributes spin polarized conduction electrons at the Fermi energy.