Membranes are one of the most fascinating structures in biological cells.

At first view this is seemingly contradictory, but the two functions are closely related to the structural and chemical composition of biological membranes: The first is a property of the membrane lipids, which build up a barrier for water and water soluble solvents such as salts and sugars. The second function is primarily made possible by the presence of proteins. 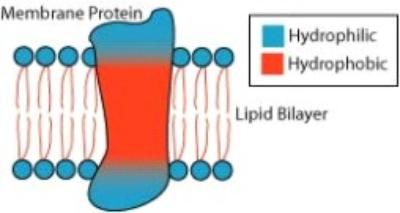 Biological membranes are composed by a lipid-bilayer and proteins. The whole structure is held together by hydrophobic interactions. The amphiphilic nature of membrane proteins makes it difficult to work with them.

The membrane proteins mediate the communication with the outer world of the cell, which involves an extremely broad spectrum of biological functions:

Considering the wide biological functions of membrane protein, it is not surprising that about 30% of all encoded proteins are membrane spanning peptides (Venter et al, 2001, Engelmann et al, 2001). Especially in higher, multicellular organisms they fulfill indispensable functions to mediate the communications between the different cells, tissues, organs and organisms.

The important function of membrane-proteins in the organization of complex structures predestinates them to important targets for medical drugs against various diseases. It has been estimated that 50% of all drug-targets are so called G-protein coupled receptors (GPCR) (Howard et al., 2001). These membrane-proteins translates an outer signal into an internal signal and amplifies it: Upon binding of a ligand at the receptor, the structure of the GPCR-protein is changed slightly and allows the activation of internal messenger cascades. These second messengers alters finally the behavior and/or structure of the cell. Despite that all of these receptors have a general architecture of seven trans-membrane alpha-helices, they recognize a wide variety of different ligands, including hormones, peptides, ions, amino-acids and photons. 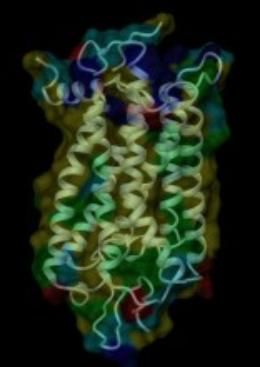 A well studied system of such GPCRs is the rhodopsin from the bovine retina. The protein translates the optical information (photons) into a biochemical reaction cascade opening ion-channels leading to a nerve-cell excitation. The tree-dimensional structure of this over 3000 atoms containing molecule is depicted in a simplified ribbon representation surrounded by a surface model indicating the surface-charge. The structure was solved by Palczeski et al, 2000 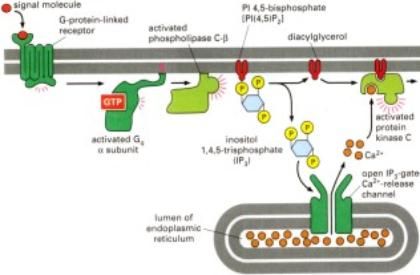 A typical signaling pathway after activation of a GPCR receptor: Upon binding, the receptor activates several G-proteins and these activate other second messenger. In this way, the original signal is branched, amplified and translated into a cellular reaction (taken from Alberts et al., The molecular Biology of the Cell, 2002).