In the SNIAMS building we have a well stocked chemistry lab for sample preparation, material studies and electrochemistry. Along with: 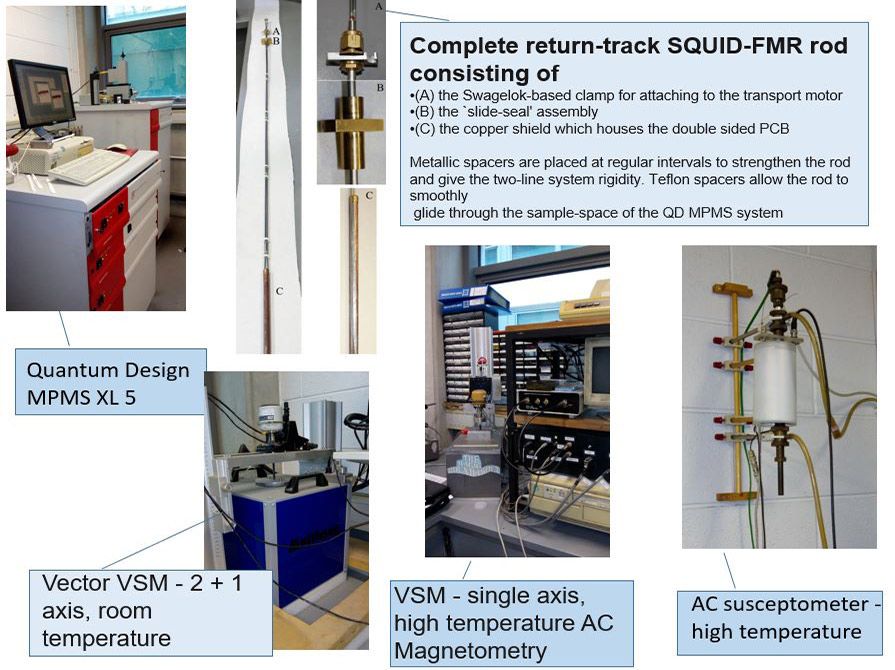 In the electrochemistry division, we have state of art facility to electrodeposit nanostructured films/nanowires and perform their modern magneto-electrochemical analysis (cyclic voltammograms, chronoamperometry, impedance spectroscopy, etc.) with and without magnetic fields (0 - 1.5 T in SNIAMS, 0 - 5 T in CRANN). Currently, we are equipped with:

“Heloïse” PLD chamber (designed by Surface) is a high vacuum (HV) system capable of a base pressure of ~10-7 mbar. This versatile chamber has been used for the deposition of both oxide and nitride thin films, ranging from perovskites such as ferromagnetic La0.7Sr0.3MnO3 and ferroelectric BaTiO3 and spinel ferrites such as NiFe2O4 and CoFe2O4 to N-doped oxides and even sellenides. A four-target carrousel allows for the deposition of multilayered films in a one-step process. A maximum substrate temperature of 950 o C is achievable by radiative heating from platinum coils and is monitored and controlled by a K-type thermocouple. A mass flow controller is used to control oxygen pressure in the chamber, while a baratron accurately gauges the pressure during deposition. The system is equipped with a high pressure RHEED which allows for the in situ monitoring of growth at the unit cell level and characterisation of the surface structure, a RF plasma source for oxygen- and nitrogen-doping, a Langmuir probe and in situ optical reflectivity. The laser used to ablate the target material is a Lambda Physik KrF eximer laser capable of supplying 350 mJ pulses of 248 nm light of 25 ns duration at a rate of 1-20 Hz. 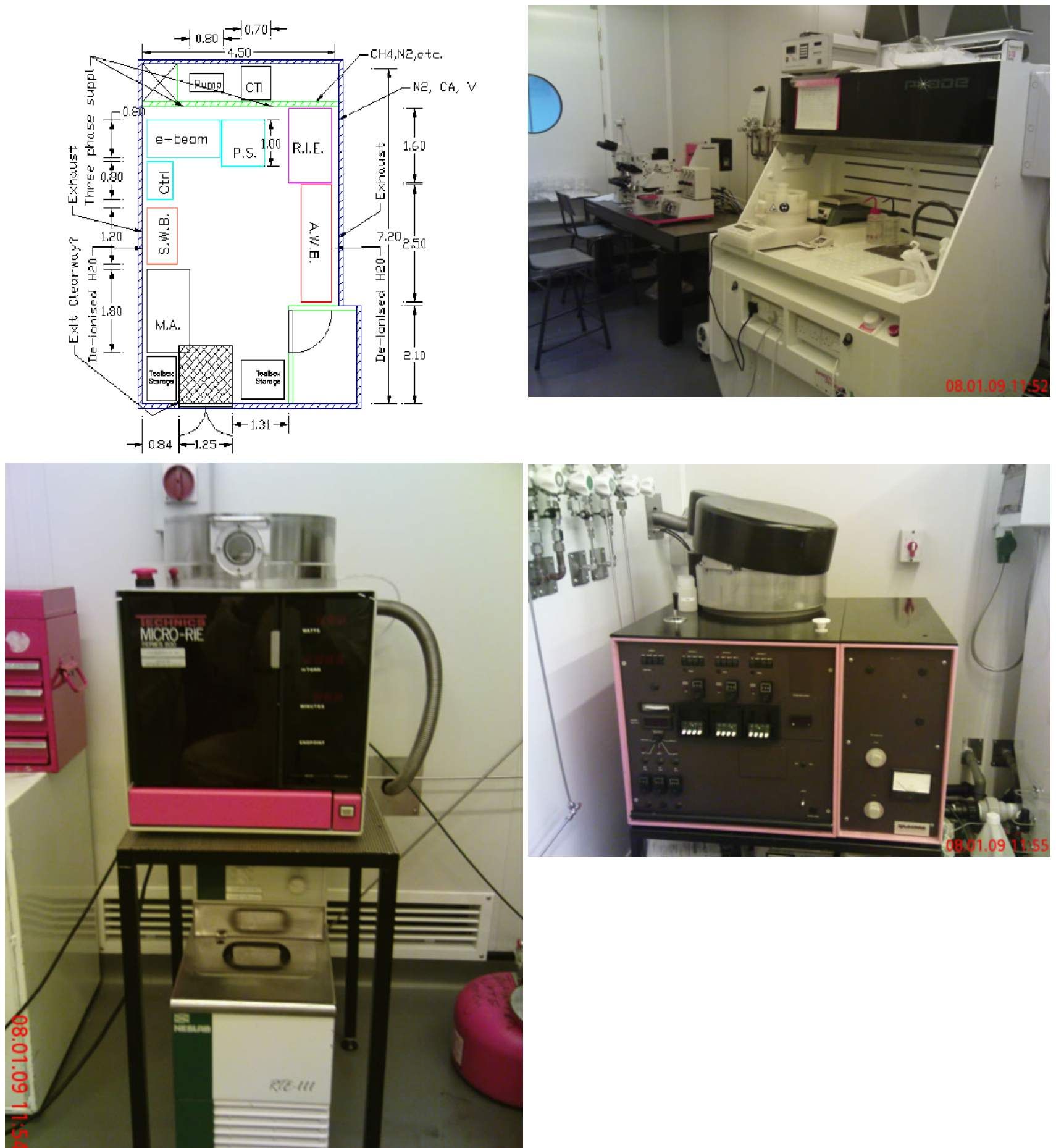 The Millatron system consists of a vacuum chamber with a rotational sample stage and end point detector, an plasma bean source with an RF power supply, a DC supply which controls a magnet (Helmholtz coils) in the ion gun and a MFC with lets high purity Ar into the system.

COPRA 260 has been selected as the plasma bean source in our Millatron. COPRA is a filamentless, radio frequency (RF) driven, low-pressure plasma beam source. The RF power is inductively coupled to the plasma through a matching network and a single-turn excitation electrode. An essential feature of the design is the tunable matching Network which is incorporated into the source. The matching network comprises two resonant circuits which employ variable capacitors to match impedance and hence maximize the power transfer efficiency to the plasma. Remotely matched sources are also available upon request. The necessary “resonant” excitation of the plasma is achieved by applying a weak transverse magnetic field generated by means of a series of built-in Helmholtz coils. The strength of the magnetic field is controlled by an auxiliary power supply. The beam produced by the COPRA is also quasi-neutral i.e. it contains roughly the same number of ions and electrons permitting deposition, etching and surface modification of both conducting and insulating substrate materials without significant charge build-up. The plasma is typically ignited by the creation of a pressure pulse. The process gas is fed directly into the excitation cavity of the plasma source.

The base pressure of the system is typically 2 x 10-7 mToor and the working pressure is 5 x 10-5 mTorr using 0.14 sccm of argon. RF power of 400 W is used with a magnet current of 3.5 A. The sample is rotated in a planetary fashion at 45° to the ion beam and the etch rate is material specific.

Hiden end point detector
One of the most important issues in ion milling process is how to precisely control and stop the milling process at certain layers in the mutil-layer stacks. In the case of MgO-based MTJs, the ideal end point for the definition the small junction is the 0.8 nm Ru in the AAF layers (IrMn/CoFe/Ru/CoFeB). For this purpose, a high sensitive Hiden end point detector (EPD) was installed on the top of Millartron.

The Hiden EPD consists of ion milling probe, radio frequency (RF) head with amplifier and PC running MASsoft. The ion milling probe contains an energy filter, a quadrupole mass spectrometer and a secondary electron multiplier detector. Any ions entering the quadrupole field experience potential differences deflecting them from their original trajectory. The extent of deflection of any ion entering the field is related to its mass: charge (m/e) ratio. At each interval on the RF scan only one m/e ratio resonates with the field allowing the ion to pass along the z-axis. All other species are deflected and neutralized by impact upon the rods of the quadrupole. The ion signal then collected and displayed by the MASsoft. By the monitor of the software, a certain end point of the ion milling process can be easily set. 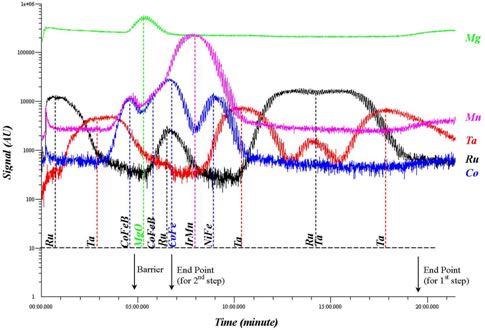 Above figure shows a typical scan obtained by MASsoft during the ion milling process for a whole MTJ stack. Five elements, Ta, Ru, Co, Mn and Mg correspond to different colors, were displayed on the scan. Each peak on the scan can exactly match to certain layer in our MTJ stack. The end point can be selected at the cross line of two adjacent layers. The end point for first (SiO2 wafer) and second (Ru in the AAF layer) ion milling step has also been marked by arrows on the scan.