Child A encounters the lodestone

The attractive power of lodestone was known in both China and Europe from about 800BC. The first person to pick a magnet up, play with it and observe its extraordinary behaviour, was probably a child. Child A's discovery was an important one and the event was dressed in legend. There are references by the Greek historian Pliny to the herdsman Magnes, who was tending his flock when the iron shod tip of his staff struck a lodestone and his iron hobnail boots were held on to the naturally magnetized rock. With the exaggeration of myth, he was stuck fast. Ancient Egyptians referred to the the lodestone as the bone of Haroeri, grandson of the goddess of the earth. In Central America, there are also Mayan legends of magnets dating back to pre-Columban times.

How do lodestones become magnetic?
Lodestones are rich in magnetite, an iron oxide mineral. Lightning, with a typical current of 1,000,000 Amps, creates a magnetic field large enough to saturate the magnetization of nearby lodestone outcrops. This is a rare event- on average lightning strikes that close to any point on the Earths surface happens once in 1-10 million years.

Greek thinkers at the time tried to fit their observations into a preconceived intellectual scheme, rather than to explain and predict the wonders of Nature. For example, the animist Thales (636-546BC) believed the lodestone to possess a soul. Aristotle (384-322BC) presupposed the unity of the mover and the object moved, insisting that there must be some intermediary to explain action at a distance. These views held sway for 2200 years, persisting even to the beginning of the 20th century in the form of the all-pervading aether. A variety of mysterious fluids and emanations were invoked to ensure contact between bodies experiencing magnetic attraction.

"Placed on the pillow of a guilty wife, it would make her confess her iniquities as she slept. It could be used for the treatment of many ailments, and as a contraceptive. There were curious beliefs that its effects could be countered by garlic or onions. It was said that sailors should be forbidden to eat these vegetables, in case their breath should demagnetise the needles."

The Chinese were the first to understand and exploit the directive properties of lodestone, and it quickly became the province of geomancers and taoist clergy who specialised in divination. From about 100AD there are references in Chinese texts to a "south-pointer", which scholars believe was a lodestone spoon mounted on top of an earthplate, seen here in plan and elevation. The shape of the spoon permits rotation upon its bowl in response to magnetic torque. It was likely that the south pointer was used to direct the Emperor in one of his key symbolic functions, ploughing a ritual furrow in a due southerly direction to ensure the fertility of the Earth.

Influences of magnetic geomancy are evident on the street plan of the southern part of the city Shantan, Kansu (below) and on other Chinese cities: Within the walls, there are traces of two different alignments, one almost north-south, the other, in a newer section of the city, following a line about 11 degrees east of north. The difference stems from the secular variation of the Earth's magnetic field. 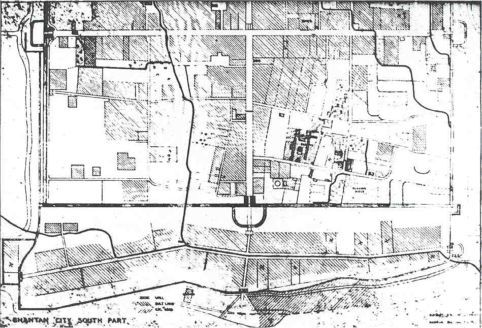 By the eleventh century tales of oriental magnetism had spread as far as Ireland, getting a mention in a monastic geography lesson on the wonders of India by Airbeartach Mac Coisse, chief professor at the monastery of Roscarberry, Co. Cork around 1000AD.