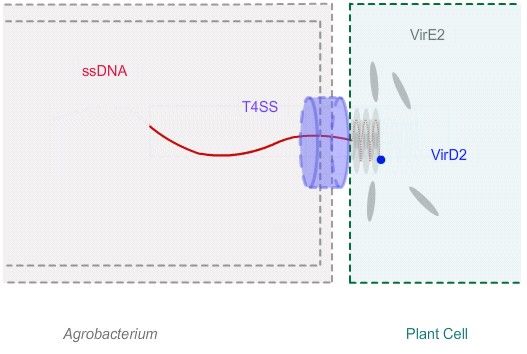 Prof Martin Hegner, CRANN Principal Investigator, and professor in the School of Physics, TCD, is publishing a research paper in PLoS Biology, a peer-reviewed open-access journal featuring research articles of exceptional significance in all areas of biological science, from molecules to ecosystems. PLoS is ranked as the most highly cited general biology journal with an impact factor of about 15.

The Type IV secretion system (T4SS) of Agrobacterium tumefaciens recognizes and exports the VirD2 protein covalently attached to the single-strand DNA out of the bacterial membranes. VirE2, a ssDNA binding protein produced by Agrobacterium and interacting with ssDNA in the plant cytosol only, is present at the cell periphery of plants. There, it binds the incoming transferred DNA and forms a compacted helical structure, which allows an efficient and active translocation of the genetic material.

The importation of genetic material (DNA) into cells is a common and fundamental mechanism occurring in conjugation and transformation. In bacterial conjugation, genetic material is transferred between bacteria through direct cell-to-cell contact. Transformation (or DNA uptake) is the acquisition by a cell of new DNA molecules from the extracellular environment. It is now known that these processes are responsible for the spread of antibiotic resistance.

The import of DNA relies on the presence of multiple and complex molecular machines that allow the transfer of DNA through the cell walls and inside the cell. In bacterial conjugation it was thought that the importation relied only on the presence of these machines in the donor cell. In other words, the acceptor cell only had a passive role during conjugation.

In studying Agrobacterium tumefaciens (a bacterium that infects plant cells) as a model system for bacterial conjugation, scientists from CRANN in Trinity College Dublin have discovered that proteins present in the acceptor cells also play an important, if not crucial, role during DNA transfer making the acceptor cell a key player during import.

These proteins (VirE2) are DNA-binding proteins that are produced by the bacterium (Agrobacterium tumefaciens) and are transferred into the host cell (plant cell) at an early stage of the infection. Using nanotools that are capable of manipulating single molecules and studying their mechanical properties with an excellent accuracy, Hegner’s group, in collaboration with scientists from Basel (Switzerland), has shown in vitro that VirE2 proteins are capable of exerting forces up to 50 picoNewton, 1000 times smaller than nanoNewtons, when binding to DNA. These contractile forces allow compaction of DNA into a helical structure and researchers now postulate that it helps to actively pull the foreign DNA into the acceptor (plant cell). Considering this mode of infection, Agrobacterium could be considered as a “smart” bacterium in the sense that it will first transfer its own proteins into the host, which afterwards help to import its DNA material (up to 150,000 bases long). These forces are among the largest found for other types of molecular motors. A striking feature however is that VirE2 proteins do not need any external sources of energy to produce this mechanical work (as any other motor would need). More concisely, the energy release during the binding to DNA is sufficient to provide the necessary “fuel” to drive compaction.

As this facilitated import relies only on the presence of a DNA binding protein in one of the compartment (the acceptor cell), it could in fact be a more general mechanism occurring in many other systems and explain the typical efficiency of DNA transfer.