In 1898, Valdemar Poulsen, a 29-year old Danish telephone engineer, demonstrated magnetic recording for the first time using apparatus like the one shown on the right, recording telephone conversations onto steel wire. His device, which he called the telegraphone caused a sensation at the Exposition Universelle in Paris in 1900, where the few words that the Austrian emperor Franz-Joseph spoke into it are believed to be the earliest surviving magnetic recording.

Above: Poulsens early Drum Telegraphone (left) followed by a later model and a drawing on his patent form. 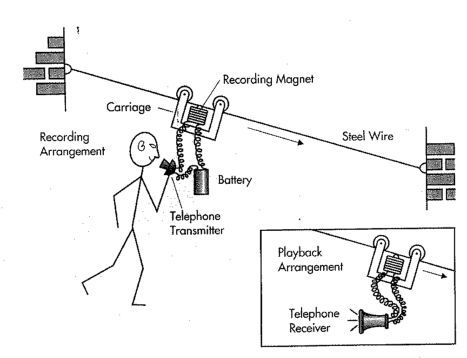 The American company which bought the patent for the Telegraphone failed because of bad management and the idea lay dormant until Curt Stille modified the device to use electronic amplification in the 1920's and marketed the patent to AEG. Germans led the way in magnetic recording in the 20's and 30's, especially in the transition to tape recording, first using steel and powder coated paper tape before progressing to plastic tape coated with a magnetic oxide. With the development of high frequency biasing, the Magnetophon(left) became a machine of excellent quality which explains why wartime broadcasts of Hitler are so much clearer than those of Churchill or Roosevelt.

The Magnetophon technology was discovered in 1945 by the advancing Allied forces and German patent rights were seized by the U.S. Alien Property Custodian's Office. Information on the production of tape recorders and tape were published by the U.S Department of Commerce. Bing Crosby used a captured Magnetophon for broadcasts on ABC. The Ampex Corporation of California was commissioned to build a tape recorder by the U.S Government. Originally intended solely for government use, by 1950 several American companies had introduced tape recorders onto the commercial market, and the first catalogue of recorded music on tape was released. In 1956, Ampex introduced the first video recorder, which took the industry by storm and quickly became the standard.

By 1950 Néel had developed a theory to explain the behaviour of isolated grains of magnetic oxides such as magnetite (Fe3O4) or γFe2O3 which were the magnetic medium in recording tape but are also present in igneous rocks. He established how if the superparamagnetic fluctuations of tiny grains became blocked, the particles could acquire a stable remanent magnetization in the direction of the Earth's magnetic field. A great success of Néel's ideas of rock magnetism were the part they played in establishing that the continents we live on are continually shifting across the globe at the rate of a few centimetres a year.

The spreading ocean floor acts as a giant tape recorder, rocks in the Earth's crust cooling in the Earth's magnetic field acquire a tiny stable remanent magnetization as they become blocked, reflecting the Earth's field at the time. The field, sustained by convective motion in the deep liquid core, changes polarity chaotically, reversing maybe once in 100,000 years. At the border between two tectonic plates that are pulling apart, new crust is constantly cooling and displacing previously-cooled rock. Bands of rock of first one polarity and then the other are observed by measuring the stray fields in oceanographic surveys. The hypothesis of Wegner of continental drift, long rejected by the geological community, was triumphantly vindicated and the reality of global plate tectonics was established.

The application of magnetic recording to computing soon followed that of audio and video recording. In 1953, a computer project team at MIT called Whirlwind introduced the magnetic core memory (left), where arrays of thousands of small doughnut-shaped magnets threaded with wires that could store and manipulate data bits into the magnets with electric current pulses. Magnetic cores remained the most reliable and inexpensive computer memories for nearly twenty years before being replaced by the semiconductor integrated circuit. Nowadays the primary random access memory (RAM) in which most of the computing is done is semiconductor-based due to its speed and higher bit density, but magnetic media provide the secondary storage on the hard disk, which stores much more information (around 10Gb in current home computers), and is cheap and nonvolatile.

There is a prospect that in future both semiconductor memory and the hard disk may in future be replaced by nonvolatile magnetic random access memory (MRAM, shown right) consisting of arrays of magnetic tunnel junctions.

In recent years, the areal density of information storage in magnetic recording has been doubling every two years (Moore's law), and it seems set to continue on that course until about 2004. A new rabbit has been pulled out of the sensor hat every few years to sustain the information revolution: advances in thin-film technology and the discovery of giant magnetoresistance, for example. The mechanics of accessing this information has been perfected to a large degree - the feat of control involved in scanning the read head of a hard disk above the spinning magnetic surface of the disk can be likened to flying a Boeing 747 with its nosewheel extended a few centimetres above the surface of a ploughed field.

The magnetic bits on a disc are now about 100nm2 in area. Ultimately the limits on magnetic recording at room temperature will be set by the superparamagnetic behaviour of very small particles.