Collaborations with Beijing Institute of Technology

We have a highly successful partnership with Dr. Han Chun Wu, a former member of the APRG who is now based at the Beijing Institute of Technology. Much of the research focuses on thin magnetic films.

One of the main topics in this collaboration is the magnetic and transport properties of thin films. This research builds on the experience within the APRG of working with epitaxially deposited magnetic materials, particularly magnetite (Fe3O4), and their subsequent characterisation.

Some recent work includes the investigation of charge-orbital coupling in magnetite layers which are separated by an insulator layer. The influence of this ordering on the interlayer exchange coupling was studied.

We also looked at Mn2Au/Fe bilayers. It was experimentally found that the Mn2Au in these AFM/FM bilayer structures possessed a much lower critical temperature compared to bulk Mn2Au, and this was bolstered by first-principle calculations.

ZnO is another material which has been investigated as part of this collaboration. The exciton spectra evolution of bent Zno wires was measured using high spatial/energy resolution cathodeluminescence spectroscopy at 5.5 K. 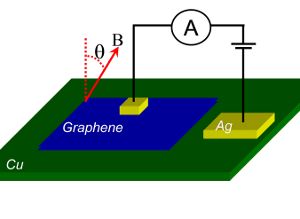 Schematic of a graphene stack sandwiched by two electrodes. Magnetoresistance properties of this device were reported in Advance Materials 24, 1862 (2012)