Animal magnetism, which was based on Anton Mesmer's belief that living beings had magnetic fields running through them which could be manipulated for healing or other purposes enjoyed a vogue in the eighteenth century. The picture of the "magnetizer" with one of his patients, usually women, shows the powerful gaze therapeutically bonding the couple together as the magnetic effluvia are redirected by the magnetizer's hands. Mesmer, the leading practitioner and theorist of animal magnetism, had been an early patron of Mozart in Vienna. He set up practice in Paris in 1784 and craved recognition for his art. His claims of magnetic healing were investigated by a Royal Commission established by Louis XVI in 1784 which included Antoine Lavoisier, Benjamin Franklin and Joseph Guillotin. Their report, described by Stephen Jay Gould as "a key document in the history of human reason" began "Animal magnetism may exist without being useful, but it cannot be useful if it does not exist". The Commission, finding no direct evidence for Mesmer's universal magnetic fluid, concluded that it could therefore only be studied through its effects, which in a series of controlled experiments they attributed to the power of suggestion. Mesmer retired to Germany but his ideas influenced the therapeutic use of hypnosis and the development of chiropracty in the USA.

A contemporary magnetic charlatan was Dr. James Graham. He installed his "Royal Patagonian Magnetic Bed" in a fashionable London townhouse and rented it out for 50 guineas a night, claiming that the streams of magnetic effluvia from the quartz crystals and lodestones used in its construction would to ensure the exceptional quality of any offspring lucky enough to be conceived there. It was initially a success, with hundreds turned away on the first day, but Graham was quickly denounced as a "quack" and died penniless. 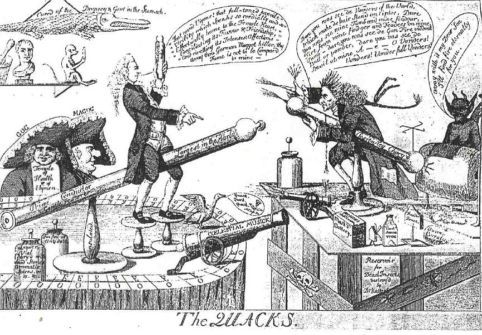 "Animal electricity", on the other hand had an entirely different future. While the experiments performed by pioneer Luigi Galvani were apparently no less bizarre- involving the slaughter of thousands of frogs, dozens of sheep and the use of cadavers for some of the experiments - they were readily repeatable and provided the basis of neurology. The picture shows Galvani and assistant touching rods of different metals to the amputated frogs legs to produce a convulsion whilst other experiments of his can also be seen on the table. 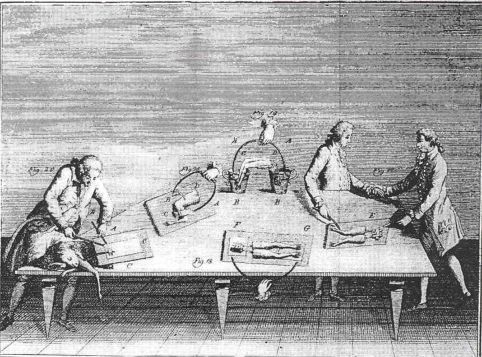 The idea that magnetic fields may have some therapeutic value lives on. Magnetic plasters can be purchased in any Japanese pharmacy, magnetic insoles, bracelets and bandages sell well everywhere. Magnetic cups for treating drinking water are popular in China, while in Western hospitals pulsed fields have been used to help treat bone fractures for the past 20 years. We have no clear idea how any of these things work - or even if they work at all.This is a fertile field for critical scientific investigation.