Electrodeposition is an excellent method for producing metallic films and nanowires in porous membranes. Magnetic fields and field gradients have surprising effects on the nucleation, morphology, reaction kinetics and rate of electrodeposition.

A uniform magnetic field has a dramatic influence on the morphology of fractal electrodeposits grown in a thin flat cell. The effect of the Lorentz force has been modelled by adapting ‘diffusion limited aggregation’ (DLA) to take account of electric and magnetic fields, gravity and concentration.

Metallic electrodeposits can be patterned with magnet arrays. The Kelvin force produced by the magnetic field gradient near the cathode modifies the thickness of the diffusion layer governing mass transport. Patterning depends on the susceptibility of the electroactive species relative to the nonelectroactive background. The patterning, which requires an orthogonal concentration gradient ∇c and field gradient ∇B2, appears after the diffusion layer has begun to form. 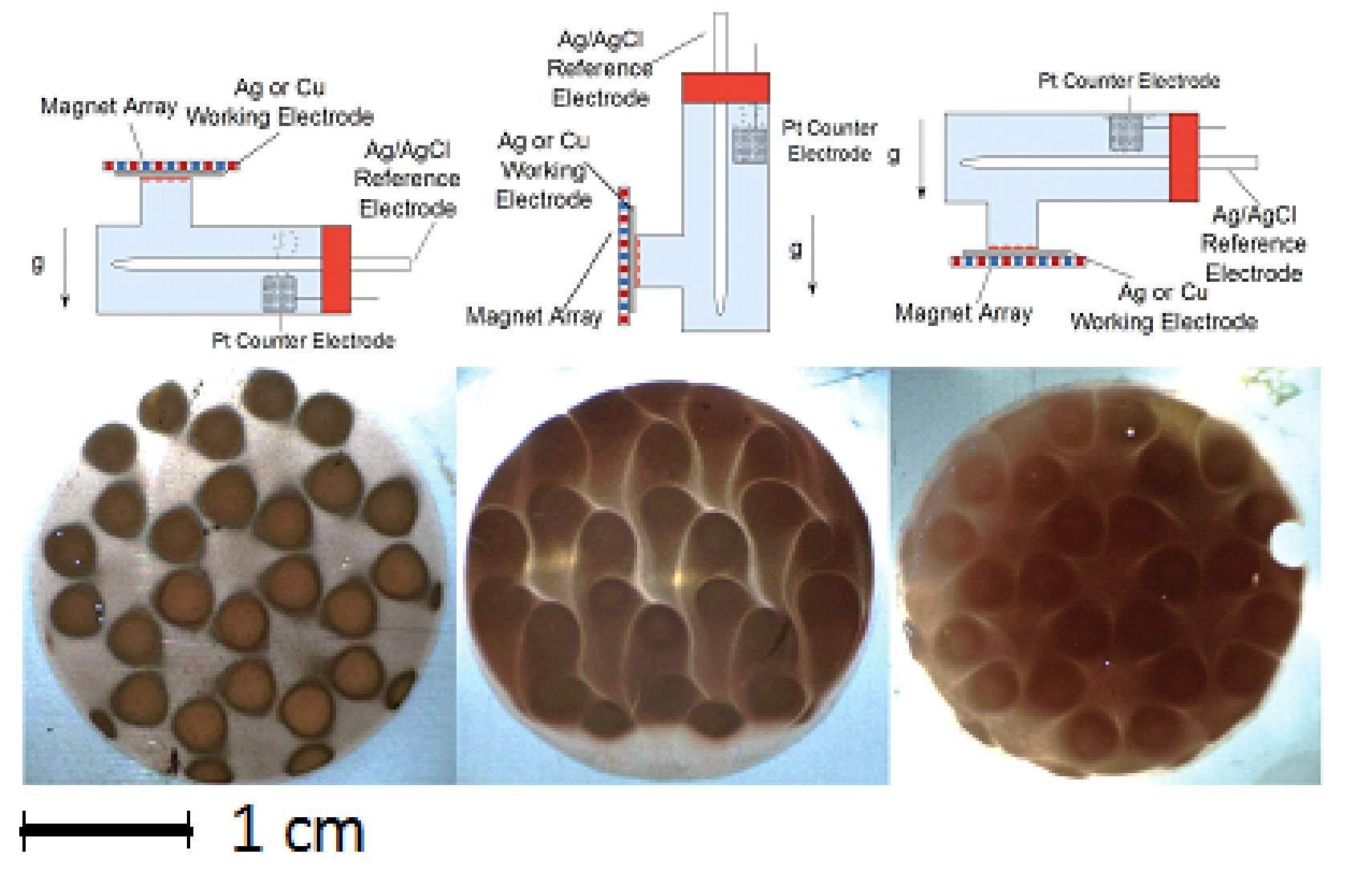 Patterned copper electrodeposits obtained with an array of small magnets behind the cathode, which faces (a) downwards, (b) horizontally or (c) upwards. The copper deposits where the field is strongest, but the forces are comparable to those due to gravity-induced convection

The number of nucleation centres increases in a magnetic field; crystallites do not grow as big when the same charge is passed, and their shape changes. An explanation of the magnetic influence on nucleation may be sought in the electrical double layer. 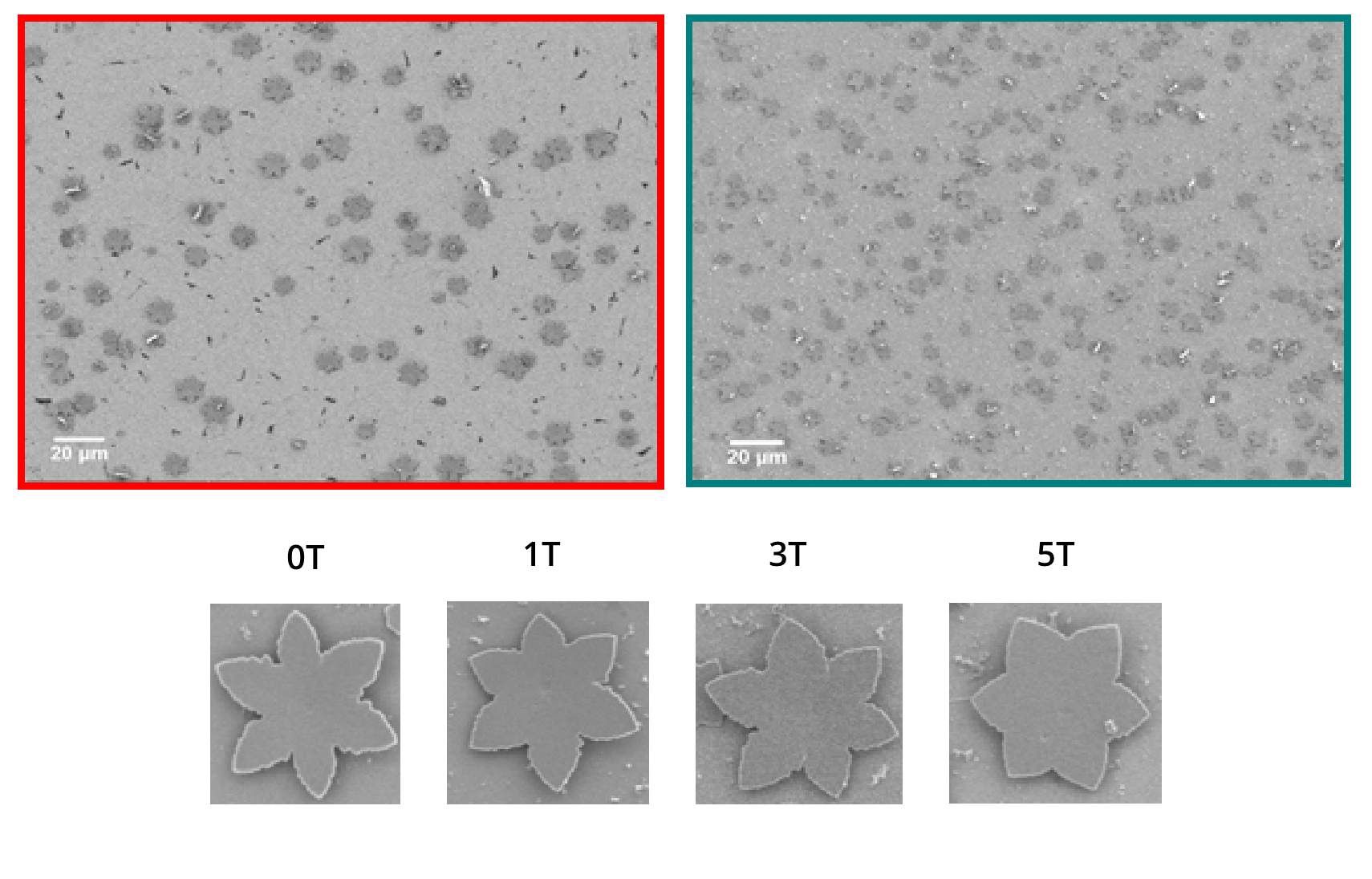 Zinc crystallites grown on a PANI-covered electrode, showing the effect of no field (left) or a 5 T field (right) on the density of nucleation centres. The flowerlike shape of the crystallites changes with applied field.

Nanowires can be grown electrochemically in porous alumina templates. We make the templates by hard-pulse anodization, and the pore diameter can be varied from 30 – 300 nm. Techniques have been developed to modulate the pore diameter along a wire. Magnetic barcodes, composed of alternating segments of magnetic and nonmagnetic metal can be grown in the alumina pores. The barcodes are detected in a microfluidic channel with integrated spin valve sensors. The filled membranes can be used to create huge magnetic field gradients at the electrode surface.

In a strong magnetic field gradient, the Kelvin force on paramagnetic species may drive convection which controls the thickness of the diffusion layer that governs mass transport. This effect can be used to enhance the transport of paramagnetic oxygen in solution. The field gradients can be produced by magnetic nanoparticles or nanowires. 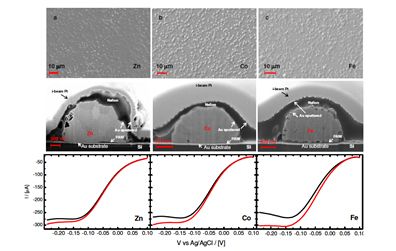 Substrates modified with gold-covered microhemispheres made of (a) Zn, (b) Co, and (c) Fe showing the influence of magnetic field gradients on the oxygen-reduction reaction.