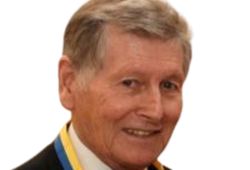 Michael Smurfit joined his father’s company Jefferson Smurfit & Sons Ltd in 1955. He was appointed Chairman and Chief Executive Officer of the Jefferson Smurfit Group in 1977. He led the early expansion of the Group in Ireland and the UK and followed it with a series of acquisitions in the USA, Latin America and Continental Europe.

Michael oversaw the merger of the Smurfit Group with Kappa Packaging BV in 2005 to form the Smurfit Kappa Group – employing 42,000 people in 33 countries on 5 continents. He has been awarded many honorary doctorates and was also made a Knight Commander of the British Empire. He is the honorary Irish consul to Monaco.