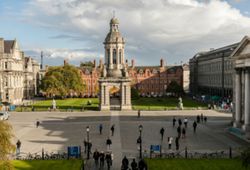 Under Mark’s leadership the DB European Economics team has been regularly ranked #1 in the annual Institutional Investor surveys. Mark graduated with a first-class honours degree from the Business, Economics and Social Studies faculty at Trinity College Dublin in 1994. Mark was elected a Scholar of TCD in 1992 and was awarded a Gold Medal in his graduating exams.