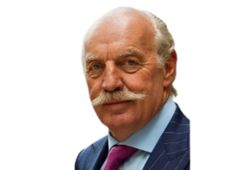 Dermot Desmond was born in Cork in 1950. His family moved to Dublin in 1956. He was educated at Scoil Mhuire in Marino and at Good Counsel College in New Ross. Before setting up his own company in 1981, he worked for Citibank, the Investment Bank of Ireland and as a banking consultant for Price Waterhouse Coopers in Afghanistan. He founded NCB in 1981 and grew the business to become Ireland's largest independent stockbroker.

In 1994 he sold NCB to the National Westminster Bank (now The Royal Bank of Scotland). He was the original promoter of the IFSC, which now has 400 companies operating in Dublin's docklands. Prior to founding IIU in 1995, he established a number of software companies serving the financial services sector. He is a Board member of several companies, charities and educational bodies. He is also a trustee of the Chester Beatty Library.