Physics is the study of the material world and natural phenomena around us, including the fundamental particles of nature and their interactions, properties of atomic nuclei, atoms, molecules, gases and solid matter. It includes fields such as astrophysics, cosmology, and physics of materials. The laws of physics are the laws which govern electricity and magnetism in modern devices such as mobile phones, computers, the internet, radio and television, the mechanics of aviation and space flight and the quantum mechanics underlying magnetic resonance imaging in medicine.

Physics: The course for you?

If you enjoy laboratory and computational work and have an interest in how fundamental physical theories explain the world that we live in, then this could be the course for you.

The Trinity Physics course includes a strong background in core physics subjects as well as courses in condensed matter physics, semiconductor devices, photonics, metals, magnetism and superconductivity. Practical aspects of the course include lecture modules in electronics and instrumentation. Physics at Trinity offers you the opportunity to study with world leading experts in the School of Physics, with modules designed to provide you with a qualification for employment across a range of research and industry settings.

The Trinity physics degrees are all recognised by the Institute of Physics, which is the professional body for physicists in Ireland and the UK, as qualifications for the professional title ‘Chartered Physicist’ (CPhys). Physics graduates are always in high demand in Ireland and abroad in modern high-technology industries, as well as in teaching. You may also find a career in academic institutions, government and industrial research organisations and production facilities or in the meteorological service. There are diverse opportunities in electronics, telecommunications, biophysics, hospital and health physics, automation and computing. Your degree course will give you the opportunity to acquire problem solving skills which will be valued by your future employer. It could also give you useful primary training for a legal, managerial or actuarial career, where a technical background is attractive.

Your degree and what you’ll study

In the first two years you study Physics and Mathematics and one other subject. The Physics course includes topics in astrophysics, statistics, mechanics, thermodynamics, electricity, acoustics and optics, nuclear physics and quantum physics. The mathematics course includes topics in calculus, linear algebra, fourier analysis and mechanics. You spend three hours per week in experimental or computational laboratories. You will learn computer coding skills through the Python programming language.

In the third year you take lecture modules in Physics and spend one day per week in the experimental laboratory as well as receiving training in communication and presentation skills. In the fourth year you carry out an experimental or computational Capstone research project during the first nine weeks of the first semester and then take lecture modules in Physics which cover core Physics at a more advanced level as well as approved modules.

You may undertake your fourth-year Capstone project at a research institute or university in the EU or further afield, provided you attain a sufficient standard in the third-year examinations. Information on the year abroad programme for second or third year students, and a list of partner universities, can be found at: www.tcd.ie/study/non-eu/study-abroad 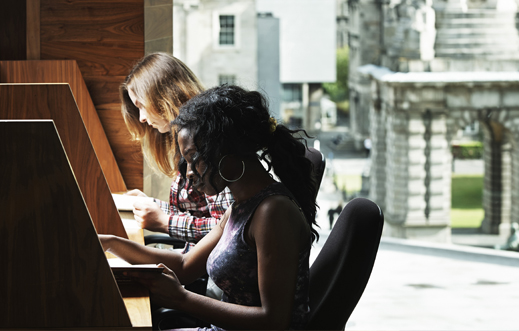 Students who wish to study the Physical Sciences stream (TR063) will specialise in one of the following subjects in third and fourth year: Physics or Physics and Astrophysics or Nanoscience.

Alternatively, the separate entry Theoretical Physics (TR035) degree shares this physics problem-solving approach and places an even greater emphasis on the underlying mathematical complexity of the universe.

Students who wish to specialise in Nanoscience can also enter the Chemical Sciences stream (TR061).

To apply to this course, click on the relevant Apply Link below

Read the information about how to apply, then apply directly to CAO.

Read the information about how to apply for Advanced Entry, then select the link below to apply.

What our graduates say

“Choosing to study Physics in Trinity was one of the best and easiest decisions I’ve ever made. The chance to pursue a full-time research project in final year and work alongside world-class researchers in one of Trinity’s research centres or abroad was a truly unique and enriching opportunity. Studying Physics has been both fascinating and riveting and has equipped me with the skills I’ll need no matter what direction my career takes after Trinity.”