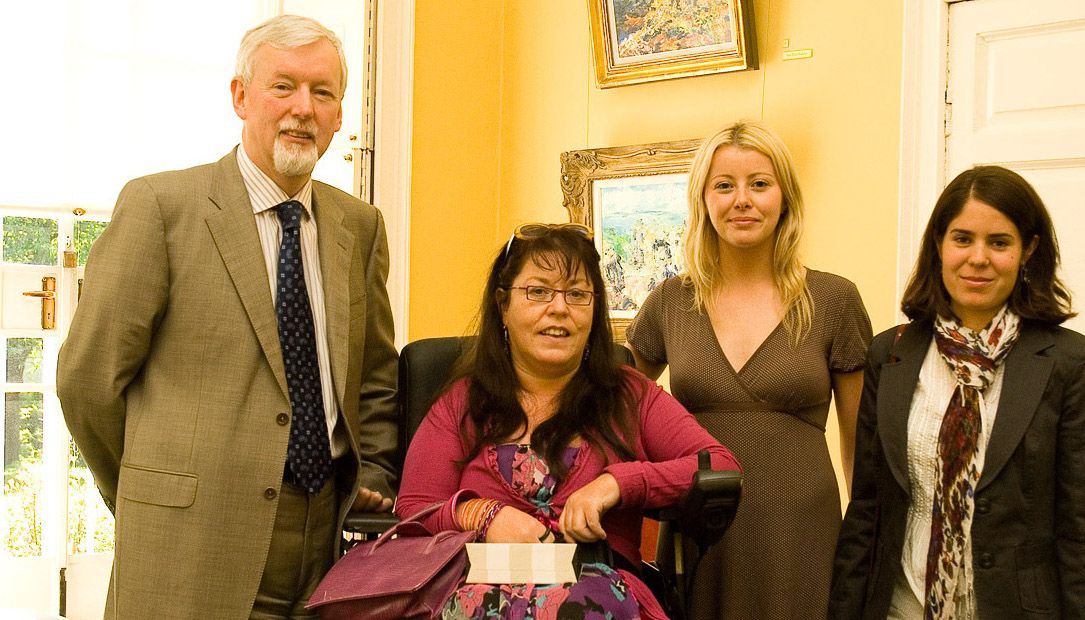 Trinity is committed to increasing the participation of members of the Traveller Community in our degree programmes, and to the equal and respectful treatment of Travellers in our community.

"I started my journey with Trinity College in 2012 having gained entrance through the Trinity Access Programme. This was a one year course that aimed to prepare and support me to be competent for entry to an undergraduate degree in Trinity. Since then, the access programme has played a huge part in my academic progression.

Having left school in 2007 with poor leaving cert results, the access programme allowed me to relearn and develop so many skills necessary for entry to university. As a girl coming from the Travelling Community, performing academically well in school was not a priority for me during my secondary school years. At this time in my life and due to the traditions of the culture I grew up in, I was not allowed to pursue a third level education. Furthermore, working was more of a priority due to financial struggles thus impacting my academic performance and taking further focus away from my studies. At that time in my life, I never in my wildest dreams would have imagined myself getting a third level education, never mind achieving it in Trinity College!

The Trinity Access Programme provided me with educational guidance, career guidance and the encouragement to pursue a third level education. Having said that, the course was extremely challenging. I learned how to study and throw myself into the deep end with subjects I had never studied before. It was a demanding year that required so much dedication, determination and perseverance. The course also encouraged me to develop my confidence in the diversity I was bringing to class and to the college.

The Gisele Schmidt scholarship was a great support TAP provided me with. This scholarship has supported me greatly throughout my time with TAP and also progressing on into my degree as a healthcare student. It has helped with the high cost of clinical placements and transport costs.

Since the TAP course, I have developed a passion for volunteer work. I have become more involved in the promotion of third level education, especially within disadvantaged communities. I also had the opportunity to work as a volunteer in Mexico City for two months. This was an all-expenses paid trip having won a travel award with EIL Ireland. Volunteering in Mexico was an amazing opportunity, allowing me to integrate into a culture that is so different to the culture here in Ireland.

My plans for the future are to hopefully finish my degree with Trinity and qualify as an occupational therapist. I hope to continue my volunteer work as an ambassador for the Trinity Access Programme and also to be a positive example of the opportunities available and the potential that exists for members of the Travelling community."

The Gisele Schmidt Scholars Fund for Travellers was founded in 2007 by colleagues and friends of Gisele Schmidt, a doctoral student of psychology in Trinity during the 1980s. The fund aims to ease the financial burden of students from the Traveller community in order that they may avail of the full benefits of a third-level education.

One prize of €1,500 for each year of the student’s course will be awarded annually to an undergraduate or postgraduate student from the Traveller community studying in Trinity College. Students interested in applying to the fund should contact the Trinity Access Programme Office by the end of October during the year in which he/she begins their course of study in Trinity. The candidate will be selected by a committee comprising a member of Trinity Development and Alumni, the Trinity Access Programme and the benefactor.

TAP contributes to tackling social exclusion through a range of innovative, targeted initiatives for individuals who have not yet realised their full educational potential, including members of the Traveller community. Its mission is to widen access to third level by addressing factors that contribute to the under-representation of Travellers and other groups at third level. It works in partnership with:

TAP has been working since 1993 to develop programmes for children, young adults and mature students in primary, second level and further education.

The Higher Education Authority (HEA) has also published a National Plan for Equity of Access to Higher Education 2015-2019 (PDF 2.4 MB) which targets groups who have been under-represented in higher education in Ireland to date, including the Traveller community.

The Equality Policy and the Dignity and Respect Policy protect all members of the University community from discrimination, bullying and harassment; this includes discrimination, bullying and/or harassment relating to membership of the Traveller community. Don't hesitate to contact the Equality Officer or the Dignity and Respect Contact Persons (listed in the policy) for advice on these matters.

Statistics on the numbers of Trinity staff / students who are members of the Traveller community are presented in Annual Equality Monitoring Reports.