New collaborative research has revealed the most efficient method to date for packing spherical objects into a cylinder.  Dr Ho-Kei Chan, a Research Fellow from the Foams and Complex Systems research group at Trinity’s School of Physics, has developed an algorithm for sphere packing which finds an arrangement in which the spheres fit as densely as possible into the cylinder provided, an issue that has a broad range of applications.

The theoretical study, which was recently reported in the journal Physical Review E and featured in ScienceNow of Science Magazine, could have a number of practical applications on both the macro and the nano scale.  Microfluidics researchers could benefit from the research when they are packing drug-delivery bubbles into tiny capillary tubes, material scientists could benefit when creating multi-walled nanotubes with nanospheres inside, and manufacturers when looking for more efficient shipping options for virtually anything spherical. 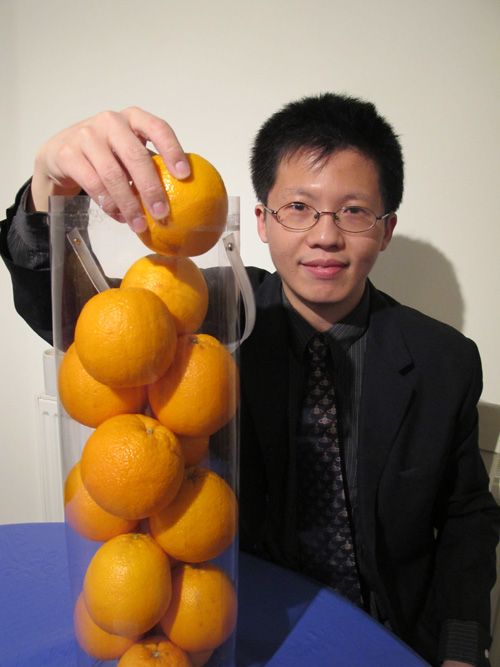 Dr Ho-Kei Chan demonstrates the challenge of packing as many spheres as possible into a cylinder.

The research findings show that achieving the densest arrangement of spheres depended on having the right form or template at the bottom of the cylinder.  Previous attempts used flat bottomed cylinders, which nevertheless meant the spheres might shift out of alignment and into a less dense configuration.  Chan introduced a novel algorithm for obtaining the right template and showed that the densest packing can simply be constructed by depositing spheres one by one into the cylinder.  Chan’s method works only for situations in which the ratio of the cylinder’s diameter to the sphere’s diameter is less than 2.7013, which are however very common.  If this ratio increases the algorithm becomes more complex, a problem that Chan is currently trying to solve based on further simulation results (to be published in Physical Review E) from Dr Adil Mughal of Aberystwyth University in Wales.  Earlier work of this Trinity-Aberystwyth collaboration includes a structural classification for such packing, which was reported in the journal Physical Review Letters.

Follow up work in the Foams and Complex Systems research group includes experiments with ball bearings and soap bubbles.  The group has recently attracted international attention for the solution of another packing problem, namely the laboratory realisation of the Weaire-Phelan structure which is famed for being the architectural design of the Beijing’s National Aquatics Centre.  Chan hopes that his spiral-like sphere packing will one day be also employed in architecture.  Chan will present his work in an upcoming seminar in NUI Maynooth (2pm, 4th May 2012; Venue: Hall C, Arts Bloc, North Campus).