Trinity College Dublin continues to climb the world university rankings, moving up to 43rd place in the Times Higher Education – QS World University Rankings just published.  Having entered the top 50 worldwide for the first time in the 2008 THE-QS rankings, this year Trinity has not only consolidated its position but advanced six places on last year’s 49th place.  It has also been ranked 13th place in Europe.

Commenting on the significance of the achievement, TCD Provost, Dr John Hegarty said: “Our stated ambition was to be at the front rank of world universities and among the top 50 globally.  We have achieved that in a relatively short period of time and this year’s ranking of 43rd place has surpassed that original goal”. 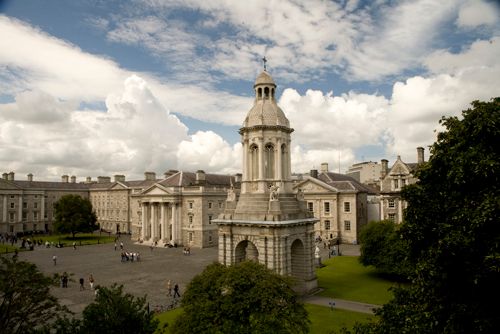 “Such a high ranking is an outstanding achievement for Trinity and reflects the quality of our undergraduate and postgraduate teaching and programmes, the high recognition by employers of our graduates across the world, and our reputation for excellence in research and scholarship by our international peers”.

“In the current economic climate it is very significant that in the international survey of over 3,200 employers, Trinity has moved up to 39th place.  This is a strong endorsement by the global workplace of the university’s undergraduate and postgraduate programmes and the calibre of our students.  Graduates are a university’s strongest asset.  We must remember that the bulk of our graduates go on to employment in Ireland’s open economy, and  our students are graduating not just with deep knowledge,  but also as creative, clear-thinking and self-starting all-rounders.  Trinity being ranked so highly by employers in this survey validates not only the long-standing values of this university, but bodes well for national economic recovery”.

“The challenge for Trinity will now be to sustain and improve its position in the rankings as a university of global consequence.  Notwithstanding the challenges of an economic downturn and diminishing public finances, the College’s new Strategic Plan 2009-2014, will be launched next month and aims to further strengthen this performance.  Rankings are only one indicator of performance and impact, and we rightly derive satisfaction from external peer validation.  Overarching this is our goal that Trinity, by virtue of the strength and quality of our performance in education, research and training, will be a driver and source of creativity, wisdom and economic prosperity for Ireland and the wider world “.

“Trinity’s achievement and that of our sister universities in Ireland in this year’s rankings has shown that the Government’s investment in education and research is paying off and that the university sector is delivering.   Ireland came late to the table and is playing catch up in terms of research investment in comparison with other countries.  It is critical that the State’s research programmes and policies such as the Programme for Research in Third Level Institutions (PRTLI) and Strategy for Science, Technology and Innovation (SSTI)  are maintained in order to sustain and build on what has been achieved in the past decade and to drive our future success.”