Kathleen O’Toole, Chair of the Commission on the Future of Policing in Ireland, was among speakers to address a public discussion on the challenges and changing context of policing in the 21st century in Trinity College Dublin this week.

Advances in technology have led to the emergence of new forms of crime, and have enabled other crimes to move online, changing their nature and impact on victims and communities. The same technological change has generated new opportunities for police forces, at a time of increasing focus on efficiency and innovation. Against this backdrop, there remains a complex relationship between public expectations of the Gardaí and the operational realities of modern-day policing. The changing nature and challenges of policing in modern society has prompted many countries to embark on processes of reflection in recent years, including Ireland, where the Commission on the Future of Policing in Ireland was established by the Government in May 2017.

As part of the Behind the Headlines public discussion series, Trinity Long Room Hub Arts and Humanities Research Institute hosted an event to explore the future of policing in Ireland on Wednesday, February 21, 2018. Bringing together a distinguished panel of international speakers and practitioners in the area, the discussion aimed to step back from the day to day challenges and controversies being reported in the media and reflect on the wider context and drivers of reform in policing, including the impact of technological and organisational innovation.

Kathleen O’Toole, Chair of the Commission on the Future of Policing in Ireland, reflected on the role of the Commission as a vehicle for policing reform. “The context for the work we are doing is global as well as local. Police services internationally are dealing with challenges of great complexity, with societies and communities that are rapidly changing, limitations on resources and addressing terrorist threats at home and abroad. That is not to deny the significant controversies and concerns which have arisen here in Ireland, but it is important to really and truly get “Behind the Headlines” and see this in a wider context.”

“The Commission on the Future of Policing was established to recommend ‘root and branch’ reform in the Irish policing system. We have seen a strong appetite for transformational change in the submissions we have received, in our visits to all parts of the country for public events and meetings with frontline Garda staff.  We have been urged to make sure that our report is implemented by Government. I was honoured to have served on the Patten Commission which developed a new blueprint for policing in Northern Ireland almost twenty years ago. I am determined that the Commission I now chair will have at least as significant an impact.”

Mary Rogan, Associate Professor in Law, Trinity, focused on how the changes seen within policing are part of a much-needed and overdue pattern within criminal justice policy of increasing attention on long-term and strategic planning.

“Policing, and the criminal justice system more generally, need a policymaking framework which is robust, resilient, and which allows for best practice to be discerned and to be implemented. In Ireland, policymaking in this area has tended to follow a pattern of long periods of neglect, interspersed by hyperactive or frenetic bursts of activity, often in response to crises. Engagement with research and with bodies and knowledge external to the criminal justice system has been patchy. This has resulted in the development of criminal justice policy without a long-term, strategic outlook, and without the benefit of the input of outside expertise.”

“Within the last ten years, however, we have seen changes in how policy is formed in Ireland. Criminal justice agencies are conducting more strategic planning, working more with outside bodies, and seeking more access to data and research. This movement is visible in the work of the Penal Policy Review Group set up by the Department of Justice and Equality, and also in the consultation process run by the Commission on the Future of Policing. More use of data and evidence, more working between agencies in the criminal justice system and outwards, and more oversight.” 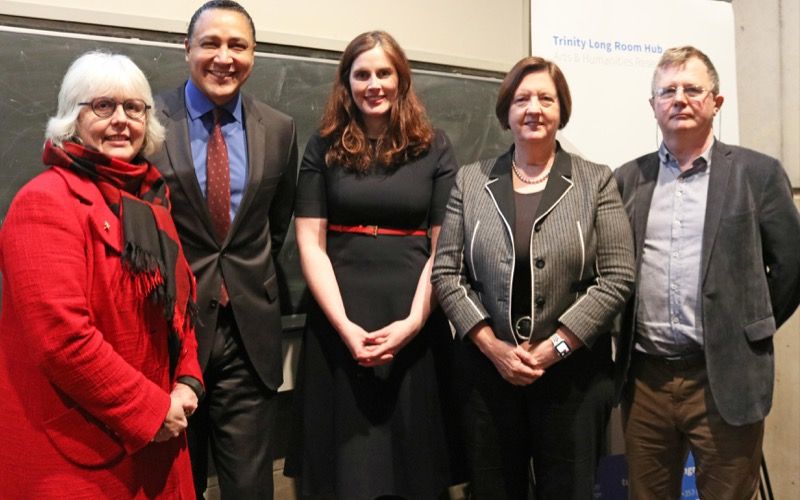 Eunan O’Halpin, Professor of Contemporary Irish History, Trinity reflected on the history of the Garda Síochána since its foundation as the national police force in 1923. “With much of the talk of the need for restructuring of An Garda Siochana and regulating the internal affairs of the force more transparently we risk throwing out the baby with the bath water.”

“Instead of attempting a dispassionate review of policing internationally, many commentators seem intent on conducting a rolling inquisition on the force, its ethos, structures, and management, which bears little relationship to reality or to how the force generally interacts with and is generally regarded by the Irish public.  The history of the Garda Siochana has, by and large, been one of a force which won and which retains remarkably high levels of public confidence and esteem.  How can this be so?”

Antonio M. Oftelie, Executive Director, Leadership for a Networked World and Fellow, Technology and Entrepreneurship Center, Harvard University, spoke about how technology and innovation can shape the future of policing. “A great challenge is simmering in public safety and policing – and it will soon reach a boiling point. The challenge resides in the tension between the promise and peril of emerging technologies. The promise is bright – as the convergence of artificial intelligence, machine learning, robotics, and the Internet-of-things will bring unprecedented capacity for policing organisations to respond better, faster, and cheaper to public safety threats. Yet the peril is dark – the data, algorithms, rules, sensors and networks that underpin technological progress could have tremendous negative impact on civil liberties, social equity, and public trust.”

“To move forward, society and policing leaders must grapple with a set of challenging questions: How can policing organisations leverage the newfound capacity from advanced technologies, while mitigating impact on civil liberties and social equity? What form of governance and transparency can enable “algorithmic justice” – ensuring that data-driven decisions are bias-free? How should the efficiency and effectiveness that drive public value be measured in the digital world, and how can that value be balanced with public trust? Much is at stake. How society responds to the promise and peril of emerging technology will define the future of policing legitimacy. We must act in time.”

Kathleen O’Toole, Chair of the Commission on the Future of Policing in Ireland, is a career police officer and lawyer who rose through the ranks of policing in the United States. She has served as Chief of the Seattle Police Department, Boston Police Commissioner and Chief Inspector of the Garda Síochána Inspectorate.

Eunan O’Halpin, is Professor of Contemporary Irish History, Trinity. His research interests include Irish and British 20th century political and administrative history and international relations, with particular reference to intelligence and terrorism in the twentieth century.

Antonio M. Oftelie, is Executive Director, Leadership for a Networked World and Fellow, Technology and Entrepreneurship Center at Harvard University. He is an expert on how law, policy and technology can be aligned to create exceptional environments for organisational innovation and adaptation. He is also a member of the Commission on the Future of Policing in Ireland.

Mary Rogan, Associate Professor in Law, Trinity, leads a project funded by the European Research Council on the oversight of prisons, and is the Chairperson of the Implementation and Oversight Group on reforms to penal policy which reports to the Minister for Justice and Equality.

About the ‘Behind the Headlines’ Series

The ‘Behind the Headlines’ discussion series hosted by Trinity Long Room Hub Arts and Humanities Research Institute offers background analyses of current issues from experts from the fields of arts and humanities research. It aims to provide a forum that deepens understanding, combats simplification and polarisation, creating a space for informed and respectful public discourse. The series is supported by the John Pollard Foundation. #HubMatters https://www.tcd.ie/trinitylongroomhub/whats-on/details/behind-the-headlines.php

The next “Behind the Headlines” event “#MeToo – Then and Now” will take place on Wednesday, March 7, 2018. Organised in partnership with the Institute of Irish Studies in Liverpool University it will explore if and how the position of women in society has changed over the century. See more here: https://www.tcd.ie/trinitylongroomhub/whats-on/details/event.php?eventid=126786252