The Trinity College Dublin Innovation Award for 2007 has been won by Dr Steven Collins and Mr Hugh Reynolds for their work on establishing Havok, a games industry software company that was sold recently to Intel for €76m. Havok is the world leader in the development and sale of real time physics and animation software to the games industry.

The connection between new knowledge from an Irish university and new industries is well illustrated in the TCD Innovation Award for 2007. The classic cycle of entrepreneurship from laboratory research to success in the marketplace by building a globally operating company has been well executed by the team of Steven Collins and Hugh Reynolds. The company, Havok, was carefully planned through proof of concept to start-up to international venture, from internationalisation in Germany and on to the USA, to growth and to exit, and return to Ireland.

“The significance of this award is that it recognises the courage and excellence of two academically trained researchers who drove themselves with dedication to achieve the creation of a new software company in a highly specialised but very competitive niche area, and who are now sharing their experiences to assist others to venture down similar paths,” stated Dr Eoin O’Neill, Director of Entrepreneurship, TCD.

“Their experience and exit will encourage venture capitalists and other funders to back projects arising from the College’s research portfolio, and to back ventures started by graduates who can now in larger numbers leave the College energised by this example of their lecturers and fellow researchers commitment to Innovation”, Dr O’Neill added.

Dr Collins has returned to work in the School of Computer Science and Statistics in TCD, where his new ideas and knowledge of business development have been harnessed outside of his direct educational work through his involvement in the TCD Research and Innovation Entrepreneurship Programme. Mr Reynolds now works in an advisory role with new and emerging Irish and international companies.

The silver Innovation Award presentation pieces were crafted on the Trinity Technology and Enterprise Campus by Seamus Gill, one of Ireland’s noted silversmiths.

At the award ceremony, Sir Brian Fender, Chairman of the Institute of Knowledge Management (IKT) and Chairman of BTG, a major Biotechnology IP investment company delivered a guest lecture during which he outlined the opportunity for Irish institutions to improve the transfer to knowledge between third level education and business. National and European economic objectives of growth, globalisation and a shift in the emphasis of industry towards brainpower driven services require more professional connections between colleges and companies, he stated.

The IKT’s purpose it to accredit those working in the complex interface between industrial application of innovation, and the world of science where new ideas are tested and developed or discarded.

“The UK and Ireland leads the world in establishing this type of professional body. Our aim is to give people working in knowledge transfer – whether in universities, public sector research organisations, business or independent research and technology organisations – better career opportunities, widespread recognition for the value of what they do and the opportunity to involve themselves in networking with clients and colleagues around the world”, Sir Brian Fender explained.

The Irish dimension of the IKT organisation was built into its establishment by the work of Dr Phillip Graham of Queen’s University Belfast and Dr Pat Frain, Director of Nova UCD, both of whom worked closely in cooperation with Trinity College Dublin’s’ Director of Entrepreneurship, Dr Eoin O’Neill. 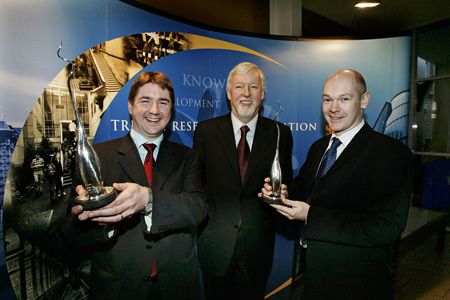