US Vice President Joe Biden received an honorary doctorate from Trinity College Dublin today − his first such degree from a university outside the United States.

The Doctor in Laws recognises the Vice President’s contribution to world politics. In line with Trinity’s traditions, an oration was given in Latin honouring Vice President Biden. The ceremony was overseen by Trinity’s Provost and President, Dr Patrick Prendergast, and the university’s Chancellor Mary Robinson who is herself a former president of Ireland.

Several members of the Biden family were also welcomed to Trinity as part of the Biden family’s visit to Ireland. The Vice President was also awarded with a gold medal by students of the Philosophical Society and later gave a speech to Trinity students and staff. Students included those who were awarded PhDs at the same ceremony.

Vice President Biden joins a long list of distinguished honorary degree graduates from Trinity including former US President John F Kennedy who was awarded a degree on his historic visit in 1963.

Welcoming the US Vice President, Trinity Provost & President Patrick Prendergast said: “We are delighted to welcome the Vice President to Trinity College Dublin, Ireland's most prestigious and highest-ranking university which has formed some of the world's great minds across the arts and sciences, including Oscar Wilde, Edmund Burke, Samuel Beckett and William Rowan Hamilton.

“We are honoured by your visit which goes to strengthen our relations with the US. As a country, America has welcomed many of our graduates over the years where there are more than 7,300 Trinity alumni currently living. Our graduates play a critical role in shaping the knowledge economy.”

“This year one alumnus has been a particular source of pride for both our countries, the Irish American William C. Campbell who was awarded a Nobel Prize in Medicine. He left Trinity and Ireland in the 1950s with a Fulbright scholarship to pursue a PhD in the US and his career prospered there. Through his groundbreaking research he has almost eliminated river blindness and made a real difference in world health.”

“Our relationship with the US is a reciprocal one. Trinity has had a long history of receiving students from top universities right across the US. Ireland is the sixth highest receiver of American study abroad students in the world with growth in demand outpacing many other European destinations. We also welcome many US postgraduates through Fulbright and Mitchell Scholarships.”

“While the appeal for some is linked to their Irish heritage, for most of our US students, the motivation to study at Trinity is rooted in a spirit of adventure and a desire for a truly international education at a world class university.” 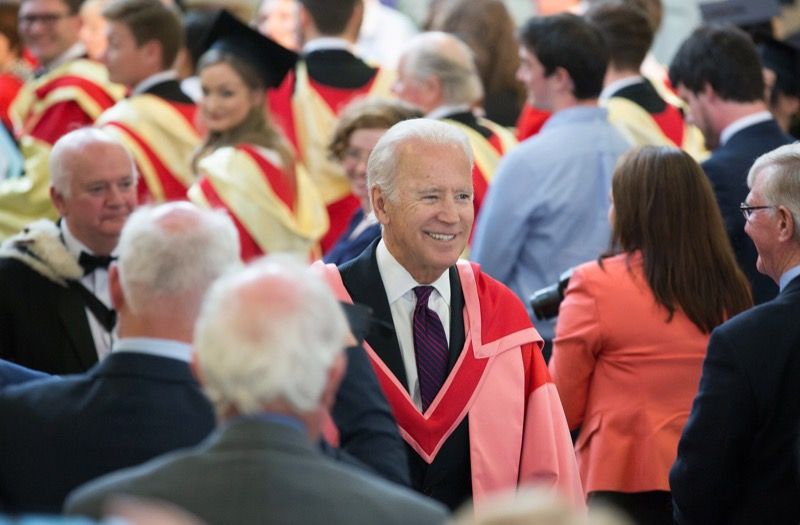 After the award of the degree, Dr Prendergast accompanied the Vice President to the Library of Trinity College Dublin to visit its famous Long Room in the 18th century Old Library building. It is home to famous manuscripts such as the Book of Kells and Book of Durrow but also a series of literary collections of global renown. They include letters and manuscripts belonging to another famous Trinity graduate and Nobel Laureate, Samuel Beckett and also writings by W.B. Yeats, one of the Vice President’s favourite poets.

The Vice President was shown the Book of Kells, the 9th century gospel manuscript written and illustrated by monks, famous throughout the world for its beautifully intricate decoration and representative of Ireland as a seat of art and learning.