Up to 460,000 people at risk from unsafe radon exposure in Ireland

Around 10% of Ireland’s population is exposed to radon levels that exceed the referenced safe level according to a new ‘risk map’ produced from indoor radon concentration measurements and relevant geological information. Approximately 460,000 individuals may currently be at risk.

Radon is the principal source of radiation exposure, making up 56% of the overall dose received in Ireland. Exposure increases the likelihood of developing lung cancer, and causes approximately 250 deaths from lung cancer in Ireland each year – a higher number of fatalities than those associated with road traffic accidents. 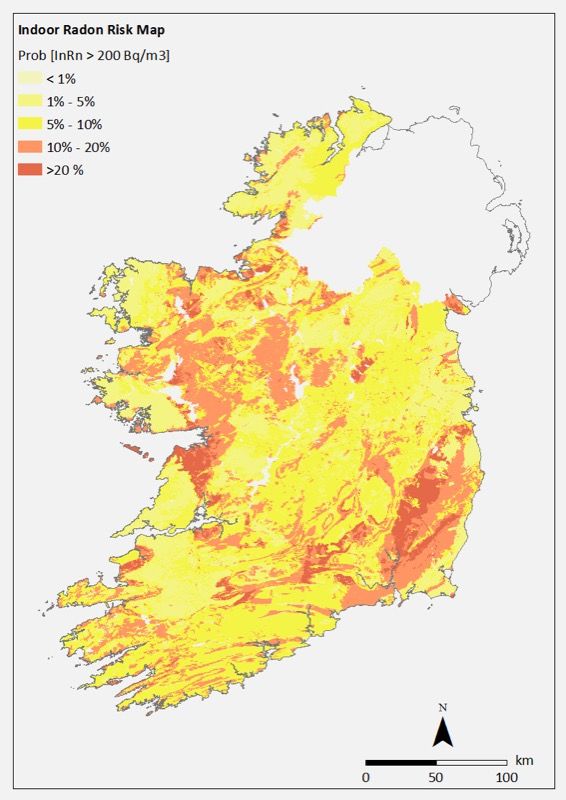 The research was led by geologists from Trinity College Dublin, who found that including geological data, such as bedrock and glacial geology, subsoil permeability and sub-surface permeability in relation to groundwater with existing indoor radon concentration measurements provides a more detailed picture of the radon risk facing Ireland’s public.

The new radon risk map illustrates the same general categories, but does so at a different spatial scale, which makes it easier to identify regional or local variations in radon risk. For example, the south-east and west of Ireland feature as regionally prominent HR areas, but the map indicates that homes with high radon could potentially be found in any county.

The new radon risk map will now need to be validated using new, annually available, indoor radon data before it is considered as a viable approach and defined in legislation.

Assistant Professor in Isotopes and the Environment from the School of Natural Sciences at Trinity College Dublin, Quentin Crowley, said: “EU member states need to translate European radiation protection legislation into national law, and this requires an accurate definition of radon-prone areas. Our research provides one example of how national-scale radon risk maps can be produced, which is especially relevant to countries developing their national radon programmes.”

Javier Elío, Researcher in the School of Natural Sciences at Trinity added: “We estimate that approximately 19% of homes in high risk areas will have indoor radon concentrations higher than the national reference level, and that remedial action should be taken. Moderate and low risk areas will have a lower proportion of homes above the indoor radon national reference level, but even some homes in the low risk category will have elevated radon levels.”

Barbara Rafferty, Environmental Protection Agency, said: “No model — no matter how sophisticated — can substitute for having indoor radon levels tested. For this reason we advise all householders to test their homes for radon and, if high levels are found, to have their houses fixed. Further information is available on radon.ie.”