Percy Ludgate published the world’s second design for a computer. He designed it, often into the early hours, in his home at 30 Dargle Road in Drumcondra, Dublin, where the plaque was unveiled. 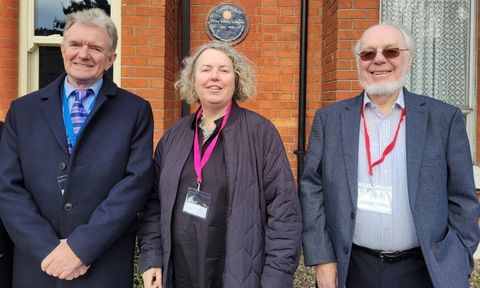 Percy Ludgate published the world’s second design for a computer.

He designed it, often into the early hours, in his home at 30 Dargle Road in Drumcondra, Dublin, where the plaque was unveiled. He died in that house 100 years ago on the 16th of October 1922. There were only two mechanical designs before the electronic computer era: Charles Babbage’s “Analytical Engine” (published in 1843 by Ada Lovelace, whose bust will soon be erected in TCD’s Old Library), then Percy Ludgate’s “Analytical Machine” (published in 1909 in the Scientific Proceedings of the Royal Dublin Society). All modern computers are, in principle, analytical machines.

The unveiling was sponsored by TCD’s School of Computer Science and Statistics and was jointly hosted by the School and the owners of 30 Dargle Road, Michael Mongan and Joan Hovenden.

Ludgate’s contribution to computer science was first recognised in 1991, by the establishment of the Ludgate Prize by Prof. John G. Byrne, the then Head of the (former) Department of Computer Science. Since then, the School’s John Gabriel Byrne Computer Science Collection has archived and catalogued evidence of Ludgate’s life and work, and this effort continues today.

Provost Linda Doyle said: “When you think of the brilliance that happened in that house, it makes you realize how extraordinary Percy Edwin Ludgate was … it is exceptionally fascinating when people can see into the future and come up with a design for the future before anything exists to implement it.”

Professor Brian Randell, School of Computing, Newcastle University, said “We have learned that in the early 1900s here in Dublin, indeed in this house, a lone Irish inventor, Percy Ludgate, produced a remarkably innovative design for a fully programmable mechanical computer. Ludgate’s design differed significantly from, and was in several ways a conceptual advance on, Babbage’s. In fact, Ludgate’s plan was one of the most significant advances on Babbage’s ideas until the advent of the electronic digital computer some forty years later. Yet it seems certain that Ludgate’s work largely pre-dated his learning of Babbage’s efforts, and that his main ideas were completely original.

Perhaps somewhere more information about his life and his machine still exists, awaiting discovery. Meanwhile, our results have been documented in papers in two first-rank journals, and a book. And there is now more than sufficient information available for the Irish STEM communities represented here to be justly proud of Percy Ludgate’s life and in particular of his astonishing work.”