Trinity has begun planting wildflower meadows on College Green after thousands of students, staff and members of the public voted to replace the manicured lawns beside Front Gate with the more nature-friendly alternative.

Held in February this year, the poll received 13,850 votes, with 12,496 of those (around 90%) in favour of the conversion to wildflower meadows.

The poll was initiated as part of the university’s response to Ireland’s biodiversity crisis.  Lawn-mowing and ground preparation can disturb insects that feed and nest in the soil. Wildflowers support biodiversity and provide a habitat for native insects and food for pollinators in the city centre. 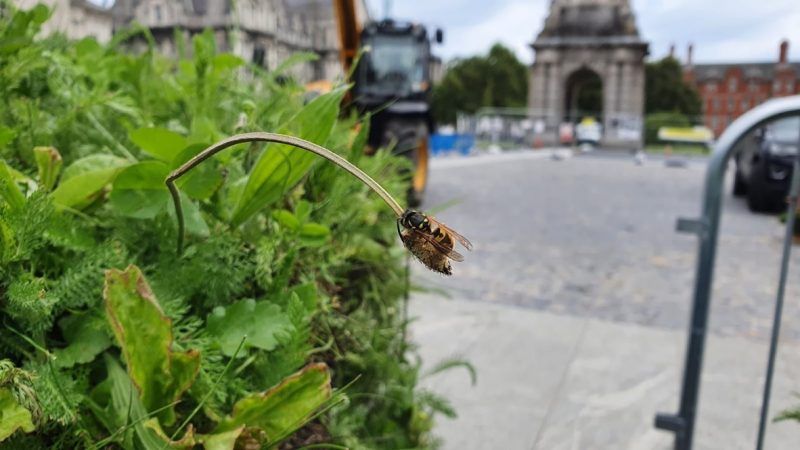 The new wildflower meadows will further increase the range of plant species available for pollinators, as well as cementing Trinity’s commitment to the All-Ireland Pollinator plan (and its own Campus Pollinator Plan), while representing a pioneering attempt in Ireland to place wildflower spaces in a formal setting.

The wildflowers being planted will include a mix of annuals and perennials, with as many as possible being of known Irish origin. Planting may be supplemented with some bulbs and rhizomatous plants – such as wood anemones. The main aim will be for flowering to extend over as long a period as is possible.

“The new wildflower areas will bloom in one of the most prominent areas in Dublin, which is passed by thousands of people every day. The green space outside our iconic Front Gate may look a little less tidy than it once did but will be more colourful and serve as a constant reminder of what nature looks like while underlining the increasingly important role we all have in protecting our environment.”

“The meadows will flower from Spring to Autumn and be left untouched over the winter months when pollinating insects, such as butterflies, hoverflies and bees, are not active. We think that this change sends out a strong signal that Trinity is not bound by the past but engaged with the future, and that we, as an institution, are keen to engage with the wider world on important societal issues.”

“The wildflower meadow is one of many steps that Trinity is taking with sustainability / regeneration in mind. We are delighted that such a high proportion of our students, staff and members of the public voted in favour of this milestone initiative. The fact that so many people in our community participated in this historic decision is a powerful testament to our collective desire to create spaces for nature in our cities.”

Mary Reynolds, renowned landscape designer, and winner of the top prize at the Chelsea Flower Show in 2002 is a champion for re-wilding areas. She said:

“So many people feel powerless when they become aware of the environmental problems we are facing. Huge changes and big ideas are needed fast. Trinity has shown how we can all be part of the solution.

“If each of us takes as much land as we can spare from our own gardens, farms, housing estates, industrial estates, parks, schools and colleges and gives them back to nature, it will allow her the space to take care of all her creatures. We can be part of an important movement, to share this earth with all the other life forms that we are hopelessly, completely and cluelessly dependent upon. We can create a patchwork quilt of hope that will wrap its way around the earth and shift the consciousness from being one of gardener to being one of guardian.”