It is with great sadness that the College community has learned of the death of Grania Maeve Rosaura, Dowager Marchioness of Normanby (Grania Guinness), who was instrumental in founding and supporting the development of the Moyne Institute of Preventive Medicine, where scientists have conducted high-impact research for over 60 years.

Lady Normanby passed away peacefully at home on January 15, aged 97. 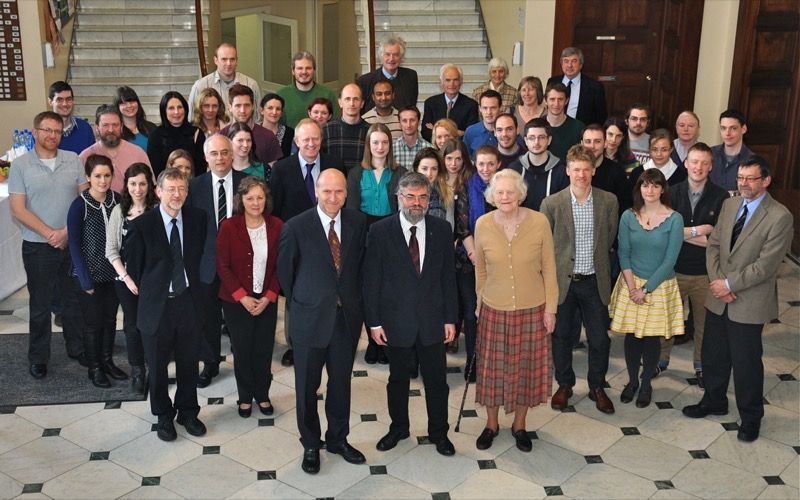 Lady Normanby laid the foundation stone of the Moyne in September 1950, after her family generously provided funding for its construction to commemorate the death of Walter Edward Guinness, the first Baron Moyne, who was assassinated in Cairo in 1944. At the same time, a capsule containing such contemporary items as malting barley, freeze-dried bacteria and a vial of penicillin, was planted. Lady Normanby then returned to open the Institute when the construction was finished in 1953.

The Moyne Institute has subsequently undergone several important changes, each financially supported by the Normanby Trust. In 1963 a two-floor extension provided laboratory space for the Department of Social Medicine and increased the size of the undergraduate teaching laboratories. A similar extension to the north wing opened in 1981, providing a substantial increase in research laboratory space, including containment facilities for handling dangerous pathogens and recombinant DNA. And in 1994, the north and south wings were extended, allowing space for elevators and fire escapes, and more laboratory space.

In 2012, extensive refurbishment to the research laboratories in the north wing was completed, and Lady Normanby and some of her family visited the College to look on the changes. Provost of Trinity, Dr Patrick Prendergast presented Lady Normanby with a bound copy of a specially commissioned poem entitled ‘Grania’, which was written by Iggy McGovern.

Professor of Microbiology at Trinity, Charles Dorman, said: “Lady Normanby was a true and generous friend of the College and of the University. She and her family funded the construction of the Moyne Institute (1953), together with major extensions and refurbishments to the building in 1963, 1981, 1994 and 2012. She also served as the 41st Pro-Chancellor of the University of Dublin (1984-1996).”

“Together with the staff of the Microbiology Department, housed in the Moyne Institute, I was greatly saddened by the news of Lady Normanby’s death, but take great comfort in our enduring and close ties with her family.”