Researchers at Trinity College Dublin were acknowledged for their innovative research and entrepreneurship at the Trinity Innovation Awards 2017 special awards ceremony last night [November 27th, 2017]. The highest accolade, the Provost Innovation Award went to Professor of Biochemistry, Luke O’Neill for his outstanding contribution to innovation throughout his career.

Professor O’Neill’s academic track record has seen the publication of his research in some of the highest impact peer-reviewed journals such as Nature, Science, Cell and PNAS.  He has consistently translated this academic success into patents, licences, industry collaborations and start-ups.  This includes the formation of two campus companies, Inflazome Ltd. and Opsona Therapeutics Ltd, both focused on developing new drug therapies for the treatment of inflammatory diseases such as multiple sclerosis, type 2 diabetes, parkinsons, alzheimers, osteoarthritis and rheumatoid arthritis.

Congratulating him on the award, Provost, Dr Patrick Prendergast said: “I am delighted to be presenting this award tonight to Professor Luke O’Neill. Through his innovative research and the commercialisation around it, he is making a real difference in society, by developing new drug therapies and improving the lives of people with diseases such as arthritis, cancer, parkinson’s disease among others. Trinity academics have consistently achieved excellence in discovery and innovation, and Luke is one of our great exemplars in that field.” 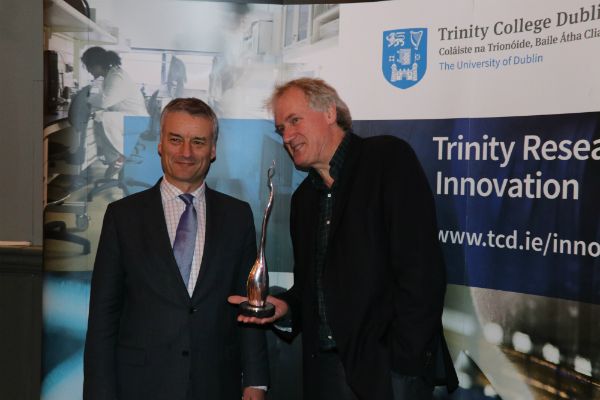 The new Director of Trinity Research and Innovation, Leonard Hobbs said: “Over the  past 30 years Trinity campus companies have raised more than €200 million in private investment; enabled the direct creation of  more than 3,000 jobs and have delivered over €1.2 billion in exports.  All of tonight’s prize winners of the Trinity Innovation Awards have played an active part in this. We are proud of this contribution to society and the economy, and aim to build on it further by leading innovation at Trinity.”

Professor of Engineering and Arts, Linda Doyle  was acknowledged  for her  outstanding contribution to the success of the SFI Centre CONNECT, the  Future Networks and Communications research centre at Trinity,  and the roll-out of  the Ireland-wide  ‘Pervasive Nation’  project, a, wireless network infrastructure dedicated to the  Internet-of-Things.

Professor of Medical Gerontology Rose Anne Kenny was awarded for her outstanding contribution to The Irish Longitudinal Study on Ageing (TILDA) and its significant influence on policy.  She was also acknowledged for her involvement in Mercer’s Institute for Successful Ageing for patients and researchers at St James’s Hospital which opened last year.

Dr Sabina Brennan, Principal Investigator in E-Health at the SFI ADAPT Centre at Trinity was awarded for her contribution as an effective science communicator, having created more than 30 short films that offer practical advice on brain health, addressing people’s fear about memory loss. FreeDem films – supported by GENIO, have been licensed to several organisations including Alzheimer’s Societies.

Other winners included Professor in Genetics Jane Farrar and Adjunct Professor Frank Boland who were both recognised for their innovative research that has had significant socio- economic and commercial impact.

Professor Farrar is co-founder of Genable Technologies ltd a campus company focused on ophthalmological research for the development of gene-based medicines.  It was acquired by Spark Therapeutics in 2015 placing Irish ophthalmology research on the global map.

Google acquired the virtual reality technology ‘Thrive’ developed by engineers led by Professor Frank Boland and went on to recruit the team of postgraduate engineers that developed the technology. It is the biggest commercial licence ever negotiated by Trinity to date.

Recognising up and coming entrepreneurial academics, Dr Matthew Campbell, Research Fellow at the School of Genetics & Microbiology and Dr Parvaneh Mokarian, Senior research fellow at the School of Chemistry and the SFI Centre, AMBER, were awarded prizes in the ‘ones-2-watch’category’. Dr Mokarian is founder of a pipeline campus company Papelli Systems which has designed an anti-reflective solution for optical surfaces using nano-structuring. She is lead coordinator of major Horizon 2020 funded €8 million programme SunPilot. Dr Matt Campbell through his research in genetics, is the founder of the campus company, Junction Therapeutics, a company harnessing a novel platform technology for neurological conditions.

The Lifetime Achievement Award was presented to Fellow Emeritus, Professor Tim Foster at the School of Genetics and Microbiology   who has engaged in innovative research since the early 1990s with particular focus on the genetics of the Staphylococcal aureus developing multiple licences in the field of vaccines, both for human and veterinary applications.  His research has led to products on the market, notably, the Equine Strangle Vaccine (MSD) and various research tools. His work on Staphylococcal aureus has led to the identification and subsequent high value license of an antigenic vaccine component. This is currently under development with GSK, with a Phase I clinical trial completed. 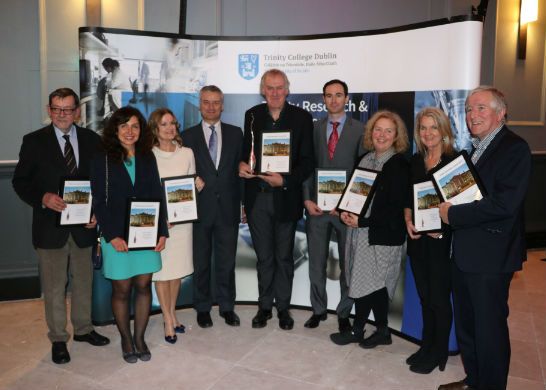 About Innovation at Trinity

About Professor of Biochemistry, Luke O’Neill

Professor Luke O’Neill of the School of Biochemistry & Immunology was awarded the Provost Innovation Award for his outstanding innovative achievement, notably;

(a) his role as academic founder of Inflazome Ltd and Opsona Therpeutics Ltd and (b) for Industry engagement, notably his recent engagement with GSK, as an Academic-in Residence. His outstanding contribution to innovation over the past 15 years has led to; Translation of academic excellence into patents (6 patent portfolios), licenses (5), industry collaborations (>15) and commercial ventures (2).

Academically, Trinity’s Professor Luke O’ Neill has an outstanding track record and his success is exemplified in the highest impacting peer-reviewed journals such as Nature, Science, Cell, Nature Immunology, Nature Medicine, Nature Genetics and PNAS. From an entrepreneurial perspective, Professor O’Neill has consistently translated his academic excellence into patents (7 patent portfolios), licenses (5), industry collaborations (>15) and Start up (2). Transferring this level of expertise into the business community provides is invaluable to industries’ asset portfolios, and impacts economically in terms of job creation and socio-economically in terms of value add to patient care. Luke’s academic and commercial reputation, coupled with his experience with his previous spinout company, Opsona Therapeutics, was integral in securing the €15million investment from Novartis and Foundation Health Partners.

Professor O’Neill has fostered a strong culture of entrepreneurship and commercialisation within his research team and continues to be an exemplar of commercialisation of research. Since spinning out Inflazome, Prof. O Neill has taken up a part time Academic-in-Residence position with GSK in Stevenage, UK. This collaborative arrangement with GSK has allowed him to continue his academic duties and broaden the training of his two Postdocs and Postgraduate student also embedded in GSK. The success of this collaborative GSK-Trinity partnership has since inspired GSK to support Trinity in establishing a PhD training programme. This programme is aimed at training the highest quality Immunology PhD graduates, with an intake of 4 candidates anticipated for Q4 2017.

In 2016, Inflazome Ltd, a Trinity campus company was founded to develop immuno-therapeutics, developed collaboratively and jointly owned by Trinity and The University of Queensland. The company incorporated and closed a Series A financing round of €15 million, Q3 2016. The intellectual property that underpins the technology has been exclusively licenced to Inflazome Ltd and is based on the Science Foundation Ireland-funded research of Professor of Biochemistry at Trinity, Luke O’Neill, in collaboration with Professor Matt Cooper and team from The University of Queensland’s Institute for Molecular Bioscience. The team developed novel therapeutic inhibitor compounds targeting the ‘Inflammasome’, a key component of the innate immune system, and resulted in a Nature Medicine publication. The high-calibre collaboration from both institutions that led to the commercial deal highlights the importance of cross-disciplinary research that marries medicinal chemistry and biological target identification. The newly developed compounds are now being developed by Inflazome as first-in-class treatments or inflammatory-driven diseases such as Oncology, Parkinson’s, Alzheimer’s and cardiovascular diseases. www.inflazome.com