Daniele Novara, a graduate from Trinity’s School of Engineering, is chasing EU Sustainable Energy Award success after making the final Young Energy Trailblazer shortlist of three for his world-first hydropower station in a mine.

The competition is decided by counting public votes accrued until October 22. You can support Daniele by voting here: https://eusew.eu/awards-public-vote/young-energy-trailblazer

A mere 40 kilometres north of Dublin Daniele’s water turbine, located deep in a zinc mine, is producing 30 kW of clean energy thanks to novel technology, developed via his start-up Easy Hydro.

“Our installation at the zinc mine in Ireland is the first-ever hydropower station within an operating underground mine. At this site alone we will see annual savings of 200 MWh, the equivalent of powering roughly 50 households, and an offset of about 60 tonnes of carbon per year.

“Our technology is particularly suitable for recovering energy from pipe networks and existing water infrastructure, making it a scalable solution for mining companies looking to green their operations and consume less electricity.”

Thanks to collaboration with EU-based equipment manufacturers and a Swedish mining company, together with funding from the European Institute of Innovation and Technology’s (EIT) Raw Materials consortium, he and his team were able to complete the first turbine installation in 2021.

Prior to completing his PhD at Trinity, Daniele obtained a BSc and a double MSc degree in Energy Engineering and Management from universities in Italy, Poland and Portugal. This international outlook has followed Daniele to the business world, where as CEO of Easy Hydro he is already in discussions to replicate the hydropower station with major mining companies in areas such as North America, South Africa and Sweden.

“Our goal now is to focus on commercialisation and creating a positive impact in the mining sector at scale,“ said Daniele. “The pilot installation proves that we can produce carbon-free electricity from surplus water pressure in the underground works in a cost-effective way. There is an outstanding potential with this technology. Its widespread use could result in savings of over 400,000 tonnes of carbon dioxide annually.”

With large-scale adoption of the technology in view, he is optimistic about the impact his company can make and its contribution to bringing the EU closer to the 2030 targets.

Aonghus McNabola, Professor in Trinity’s School of Engineering and a Director at Easy Hydro, said:

“Easy Hydro is the commercial realisation of the concept of using ‘mini’ hydropower turbines in water pipe systems, like your drinking water supply, or as is the showcase here, the water pipe system in a deep mine. The turbine extracts some energy from the flow to help reduce pressure but generates electricity as a bonus by-product. The turbines replace former valves that would have done the same thing but without creating electricity, so this is a greener solution to water management.

“The key to the innovation is that it is a low-cost solution where previous traditional devices have been much too costly for power production at this smaller scale. After a lot of work over the years we are very proud to see the solution working as it is and have high hopes that the technology will make a tangible difference as we transition to a greener future.” 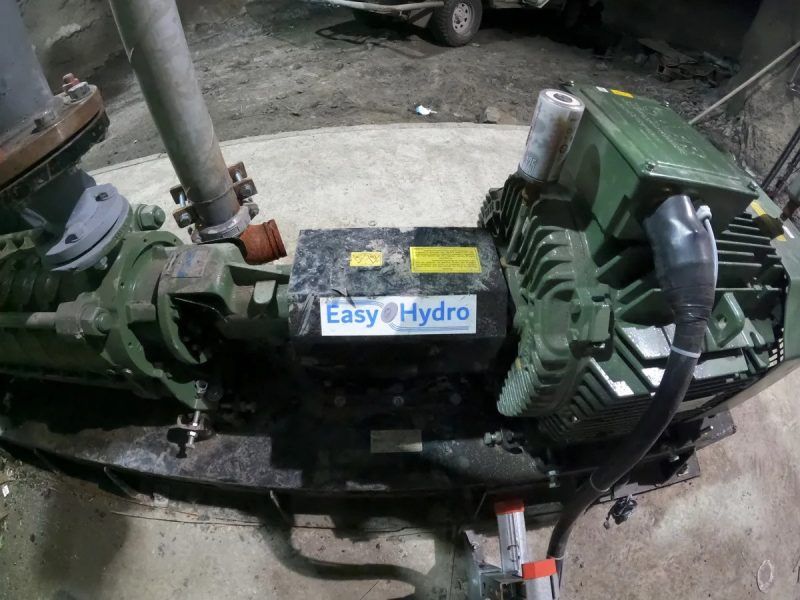 The roots of this concept can be traced back to 2011, when a €1 million EU-funded research project focused on applying it to drinking water networks. Two more EU-funded projects expanded the investigation into other water networks and a number of full-scale demonstrations were built (e.g. via the Dwr Uisce project). Over the years, five PhD students and three postdoctoral students have all played their part in the success.