The winners of the Trinity Creative Challenge Awards 2018 were announced by Trinity Provost, Dr Patrick Prendergast.  They include visual artist, Siobhan McDonald with her work, ‘Future Breath’ and performance artist, Dylan Tighe with his piece ‘Pasolini’s Salò Redubbed’. The mixed media project, Centre for Genomic Gastronomy also received an award. 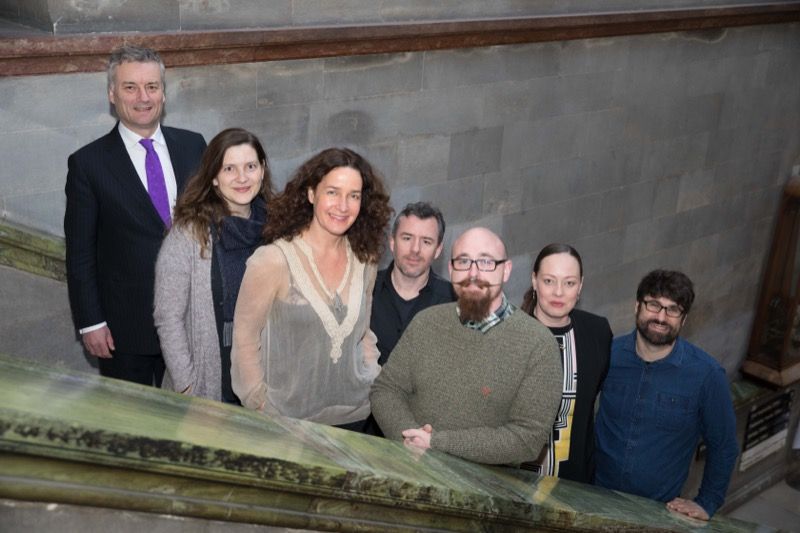 “Congratulations to artists, Siobhan and Dylan and the four artists who form part of the wonderful Centre for Genomic Gastronomy.  I set up the Trinity Creative Challenge in order to catalyse innovative interdisciplinary projects in collaboration with Trinity staff and students.  his year’s awardees will go on to create inspiring art that will be representative of this innovative synergy. We look forward to seeing their final artistic creations in the summer.”

There are two categories of prize winners, those who are awarded prizes for the first time, which is the case with both Siobhan McDonald and Dylan Tighe.  Each have received €15,000 to develop their new projects which will be presented within an exhibition or performance context in Trinity later this year.

On receiving her award, visual artist, Siobhan McDonald said: “I am thrilled to win the Trinity Creative Award. My new body of work entitled ‘Future Breath’ is about the importance of the air we breathe and the medicinal properties of plants. I am excited to be working with Trinity College and collaborating with The Department of Botany on this fascinating new project.”

Performance artist, Dylan Tighe added: “The award will enable me to bring the ideas of a range of Trinity thinkers to bear on the development of my new performance project ‘Pasolini’s Salò Redubbed’ and will be a crucial support in making this artistic vision a reality.”

In the second category ‘Continuing to Catalyse’, a previous Trinity Creative Challenge prize winner, is awarded an additional €10,000 of funding to further develop an artistic project. In this case  the Centre for Genomic Gastronomy will bring forth their highly anticipated ‘The Endophyte Supper Club’, which is an offshoot of their originally awarded project ‘Rare Endophyte Collectors Club’.  The artists include Zack Denfeld, Catherine Kramer, Conor Courtney, and Emma Dorothy Conley.

The Provost, Dr Patrick Prendergast was assisted in the final selection panel by the following members:

For more information on the Trinity Creative Challenge initiative and for updates on the awarded projects developments and upcoming events, please see www.tcd.ie/trinity-creative and follow on Twitter @TCDcreates