Trinity College Dublin’s Green Week 2010 was launched today by Senator David Norris when he presented Marie Kinsella, a representative of the Diabetes Unit in Our Lady’s Hospital for Sick Children in Crumlin, with a cheque for €5,000.  The proceeds were raised from the cartridge and mobile phone recycling scheme, one of the many recycling initiatives in place in College, which is run in association with Dave Kiernan who services businesses in Dublin on a part-time, voluntary basis recycling printer cartridges and mobile phones.

This year marks the 8th annual Green Week in College whose theme of Trinity 10:10 – Tackling the Carbon Crunch aims to motivate each individual to take responsibility for reducing the carbon output on campus by 10% in 2010.  During the week a number of discussions and forums have been organised to discuss how we can best climate-proof our economy against the impacts of present and future climate change and how we can create a low carbon society for Ireland.  Experts from business and industry, non-governmental organisations, public authorities, the scientific community and academia will take part in various discussions during the week and an exhibition organised by TrinityHaus examining the carbon and ecological footprints of ten different people in Dublin city will be held in the Science Gallery on Thursday 25th. 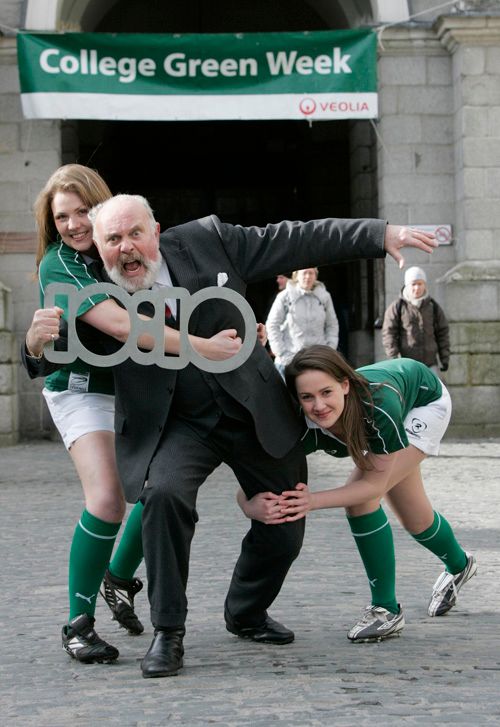 To coincide with the launch of Green Week 2010 a Kentucky Bean tree (Gymnocladus dioica) has been planted at the Nassau Street gate to replace the Horse Chestnut tree that was felled in August last year.  The new deciduous tree, which is native to central and north east America, will eventually grow to be up to 20 metres in height with a 15 metre spread and will help to increase diversity amongst the tree specimens in College.

The Green Week programme features an exciting programme of events, competitions, trails, talks and workshops such as the Green Fair in the Arts Building on Tuesday 23rd showcasing ethically produced goods, services and products to ensure sustainable living.  For those interested in cycling to work, mentors will be on hand to offer some guidance at three city destinations on Wednesday morning at 8.30am.  Other highlights during Green Week include a debate organised by the Historical Society on Wednesday 25th; guided walks highlighting Trinity’s trees, bird life and buildings and how they can be affected by human activity; workshops on growing your own vegetables and bicycle maintenance, and a Junk into Funk Fashion Show in the Pavillion Bar on the evening of Friday 26th.

A number of competitions will also be held during the week including a photography competition, an energy competition and a pub quiz which has two top prizes of state of the art bicycles sponsored by Kingspan.

During the week WEEE Ireland has set up bins at the East end of campus, in Trinity Hall and at the Trinity Centre at St James’s Hospital allowing staff and students an opportunity to recycle waste electrical and electronic equipment.  Trinity Green Week is a unique opportunity for staff, students and visitors to the College to celebrate nature, and it provides a forum to encourage the exchange of experience and tips on best practice for reducing carbon output and other ways to protect the environment both within and outside College.

A full programme of Trinity Green Week events is available on the website.