Trinity College Dublin today announced a three year partnership with Google to develop a new project aimed at transforming computer science in Irish schools.  Google is undertaking the partnership to mark 10 years in Ireland and will provide €1.5million in funding to the ground-breaking transformative project. As Ireland strives to emerge as the “Silicon Valley” of Europe, this initiative is aimed at producing the next generation of computer scientists that will make this vision a reality.

The partnership announced today aims to affect a significant long term change through a range of innovative educational interventions focused on the second level system. Under the project, 1,000 teachers will have the opportunity to undertake a certified course in 21st Century Computer Science Teaching Skills, developed by the Trinity Access 21 network in Trinity College Dublin.  Providing teachers with access to this professional development course will assist second level schools in Ireland to increase the number of students involved in and excited about computer science. 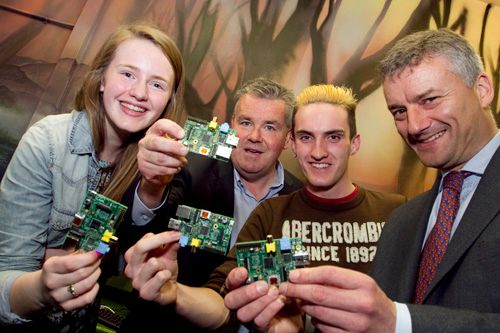 The multi-faceted project will also include targeted efforts to improve computer science and STEM capacity within Deis Schools and specific supports will be developed in order to drive educational and social change through these schools. The projects will link in with the reforming agenda of the Minister for Education and Skills, Mr Ruairi Quinn and the Department of Education and Skills.

Welcoming the initiative, Minister Quinn said, “I congratulate both Google and Trinity on this joint initiative. In the context of the major reforms in teaching and learning that I am implementing, I particularly welcome initiatives which can further enhance student outcomes. Since coming to office, I have instigated a number of radical changes in curriculum and teacher education designed to foster greater innovation and creativity in the classroom. I am sure that this project can contribute to that positive change. Interventions such as this are most effective when they are consistent with national policy and I look forward to the project leaders liaising with my Department and the Teaching Council in this regard.”

In addition, to enhance engagement with computer science and coding, over 1,000 ‘Raspberry Pis’ will be provided to participating students and teachers so they can start to learn programming in a practical and fun way. The Raspberry Pi is a credit card sized computer that plugs into a TV or a keyboard and is used to help children and teachers learn programming skills.  A national coding competition for students and their teachers will also be launched as part of the project.

Provost of Trinity College Dublin, Dr  Patrick Prendergast said; “We are delighted to announce this educational partnership with Google, which builds on their broad-ranging support for Trinity College Dublin in scaling innovative concepts. Trinity Access 21 made up of Trinity Access Programmes and Bridge21 is a proven success and this sponsorship enables Trinity make an evidence-based contribution to changing the education system, so that our teachers and students develop strong 21st century STEM skills.  The project will be developed in consultation with key educational stakeholders and Trinity’s School of Education which has welcomed this major investment and the opportunity to influence significant change in Irish education.”

Mr John Herlihy, Head of Google in Ireland said; “As we celebrate 10 years in Ireland Google is delighted to support Trinity College in its work and we hope that this project will encourage the next generation of computer scientists and technology leaders and will help drive a new wave of innovation. Computer Science education is the fuel for 21st-century innovation and development. Every year, there is a 15% growth in the number of people and machines, and by the end of the decade everyone on the planet could be on the Internet. Dublin is rightly known as the digital capital of Europe. If we are to maintain that position, computer science skills will become even more critical as companies create new business models through the cloud and the web”.

Google is a long term supporter of educational innovation in Ireland through its support of the Science Gallery, TAP and Bridge21. It has also provided funding to the Centre for Academic Achievement which provides free after-school classes in science, math and engineering subjects for primary school students from disadvantaged areas.

Lord Puttnam, Ireland’s Digital Champion commented; “My warmest congratulations to everyone involved in conceiving, negotiating and delivering this important initiative. This is great news; great news for Trinity, for Google and for Ireland.  As the country’s Digital Champion, this is exactly the type of imaginative partnership I’ve been arguing for – and I’m certain the results will speak for themselves.”

The Trinity Access 21 network comprises the Trinity Access Programmes (TAP) and Bridge21.  TAP celebrates its 20th anniversary in 2013 and has a long track record of developing innovative educational projects, courses and entry routes for students from socio-economically disadvantaged backgrounds.  Bridge21 has a strong recent presence in this area, challenging conventional models of teaching and seeking to change the second level classroom so that students are empowered to teach and learn through technology and team work, and the teacher adopts the role of an orchestrator of learning.  SUAS Educational Development (a movement that supports quality educational development in disadvantaged communities in Ireland and in developed countries) and Trinity College were founders of Bridge21, which is working closely with the National Council for Curriculum and Assessment (NCCA) on the junior cycle reform programme and its model has been successfully piloted in a range of schools, including DEIS schools that are linked to TAP.

The credit card-sized Raspberry Pi essentially consists of a circuit board, sockets for a keyboard, monitor and Ethernet cable, and an all-in-one “system on a chip” to do all the number crunching, graphics and memory work. The processor within the chip is based on the same ARM architecture found in Apple’s second generation iPhone 3G, which was released in 2008.

The Raspberry Pi runs versions of the Linux operating system – stored on an SD card – and by default supports Python, which is seen as a good programming language for novices to tackle. Any other language compatible with the ARM architecture can be used, however.

About Google in Ireland

Google is celebrating 10 years in Ireland this year.  The company established in Dublin in 2003 with just five employees and today its Europe, Middle East and Africa Headquarters employs over 2,500 at its campus on Barrow Street.  The company transacts business with more than 67 countries, helping them to transact online.