The Seamus Heaney Professorship in Irish Writing, named in honour of one of Ireland’s greatest poets and Nobel Laureate, was announced recently by the Provost of Trinity College Dublin, Dr Patrick Prendergast.

“This is a significant event in writing in Ireland and internationally. Trinity College Dublin is enhancing its extraordinary literary tradition with this new professorship,” the Provost stated on the occasion of the announcement.

The poet, who has a long standing relationship with Trinity, having been an Honorary Fellow since 1998, expressed his delight at his association with the new professorship, which will undoubtedly become one of the most prestigious appointments in Irish academia. 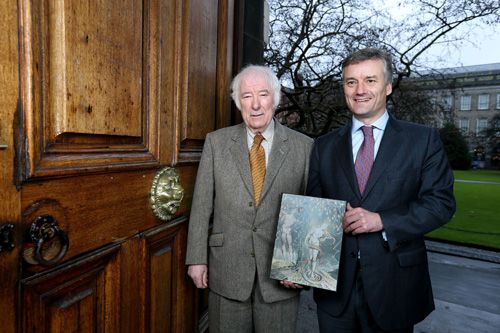 Seamus Heaney and Provost, Dr Patrick Prendergast, at the announcement of the Seamus Heaney Professorship in Irish Writing.

“It was a great honour when Trinity proposed that my name should be associated with the new Professorship in Irish Writing.  The gratitude I feel is all the greater because of my high regard for the work being done in Trinity’s School of English, and my friendship over the years with the writers and scholars who have contributed to the study and practice of Irish writing. I greatly appreciate the generosity of the benefactors, which is clearly underpinned by their special interest in poetry,” said Seamus Heaney.

The new position was generated by several of Trinity’s major donors, including Dr Mark Pigott, KBE, and Dr Martin Naughton, Chair of Glen Dimplex.  “We are very appreciative of their support and strategic vision in developing this appointment,” Dr Prendergast said. “Trinity is deeply indebted to all of its generous funders who are supporting Trinity’s growing reputation as one of the leading global educational institutions.”

Head of Trinity’s School of English, Associate Professor Eve Patten, welcomed the new Professorship and said: “The School has always played a leading role in the development of Irish literary studies, and the appointment of the Seamus Heaney Professor in Irish Writing will consolidate its reputation in this area. The post will bring major benefits for teaching and research interests at undergraduate and postgraduate levels, and is hugely encouraging for the Faculty of Arts, Humanities and Social Sciences as a whole. “

The School of English, one of the oldest in the world, founded the first ever Chair of English Literature in 1867. Many major Irish writers over the centuries have attended Trinity – including Jonathan Swift, Oliver Goldsmith, Edmund Burke, Bram Stoker, J.M. Synge, Samuel Beckett,  Oscar Wilde,  William Trevor, Sebastian Barry, Deirdre Madden and  Anne Enright.

The announcement of the new professorship was made during a read-a-thon of  Paradise Lost  organised by the School of English in aid of charity at which the poet, Seamus Heaney was participating. One of the longest poems in the English language, written by John Milton after he had lost his sight the sponsored reading of the poem was organised to raise money for the National Council for the Blind of Ireland (NCBI).The poet Seamus Heaney among many other writers and public figures participated at the read-a-thon lasting all day.

For further information on this appointment and the School of English, see www.tcd.e/English