The Letters of Oliver Goldsmith

The first edition of the letters of Oliver Goldsmith in almost a century was recently launched by the Chancellor of Trinity College Dublin, Mary Robinson, in the Long Room of the Old Library.

The new publication, edited by Trinity’s Dr David O’Shaughnessy and Professor Michael Griffin, University of Limerick, is the first comprehensive collection of the letters of Oliver Goldsmith since 1929.

The publication sets the author of The Vicar of Wakefield, The Deserted Village, and She Stoops to Conquer in a rich context, showing how Goldsmith’s Irish identity was marked and complicated by cosmopolitan ambition. The publication comprises freshly transcribed letters which are accompanied by comprehensive information setting them in their biographical and literary context. 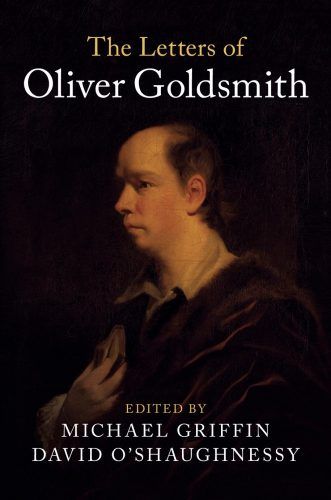 At the heart of Grub Street culture and the Georgian theatre, Goldsmith was a founding member of Dr Johnson’s Literary Club; his circle included Edmund Burke, Joshua Reynolds, David Garrick, George Colman and Hester Piozzi. Containing a detailed introduction and extensive notes, this edition will be of interest to those wishing to know more about Goldsmith the man and the writer, and provides a rich and suggestive nexus for understanding the cultural cross-currents of the literary Enlightenment in eighteenth-century London. In particular, the book presents new information about Goldsmith’s circle, including Samuel Johnson, Joshua Reynolds and David Garrick.

Dr David O’Shaughnessy commented: “The letters chart the progress of Goldsmith’s extraordinary career as a medical student in Edinburgh and Leiden before he came to London in 1756. Through his letters, we can trace the trajectory of his career from impoverished hack journalist to the celebrated literary figure he became. Despite his early death at 45, Goldsmith is the only eighteenth-century writer in the English language to have penned masterpieces in poetry, drama, and prose fiction.”

“What this new edition of the letters achieves is to contextualise this success within the broader story of Irish diasporic success in London during this period: Goldsmith was a talismanic figure for many subsequent Irish arrivals in London, both within and without the field of culture. Moreover, he was a leading light of English literary culture: a close friend of Samuel Johnson and Joshua Reynolds, amongst others, Goldsmith’s remarkable story reminds us of the close links between Ireland and Britain and the importance of the free flow of ideas and peoples across borders.”