The American Society for Microbiology (ASM), the oldest and largest life sciences professional organisation in the world, has appointed Chair of Microbiology and Head of the School of Genetics and Microbiology at Trinity College Dublin, Professor Charles Dorman, Ambassador to Western Europe.

In his role as regional Ambassador, Professor Dorman will work with liaisons from 24 countries in Western Europe to identify and prioritise actions that will advance microbiology in their international region.  He will also be responsible for identifying interests of international scientific populations who might be either prospective or active members of the ASM and identifying needs which, if reflected in ASM member services, could further enrich ASM membership for individuals in the international sector.  Professor Dorman will also aim to promote and explain the benefit of membership in ASM.

Speaking about his appointment Professor Dorman commented: “Western Europe and the Americas together constitute a region with some of the most intense microbiological research and teaching activity in the world.   By building bridges between ASM and the microbiological societies of Western Europe I hope to encourage synergistic activities that widen and deepen the involvement of microbiologists in the activities of learned societies on both sides of the Atlantic Ocean.” 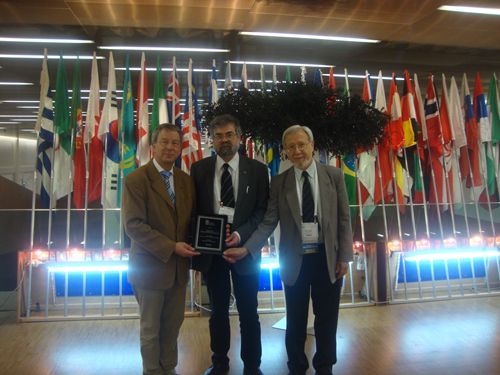 During the 4th Congress of European Microbiologists which took place recently in Geneva Professor Dorman represented the ASM where he presented a commemorative plaque to the leadership of the Federation of European Microbiological Societies (FEMS) to mark the occasion of ASM participation in the European Congress and the signing of a memorandum of understanding between ASM and FEMS.  The agreement will see the two societies work more closely together to develop the discipline of microbiology in Europe and the Americas.