The first solar observations were unveiled today at a press conference at the Royal Observatory of Belgium in Brussels.  Trinity College along with a series of international institutions have contributed to the satellite’s new technologies and science instruments.

A total of 17 new technologies are being demonstrated aboard Proba-2 before being adopted for a full-sized spacecraft. “The majority of technology demonstrators on Proba-2 have now been activated and I am happy to see that the first data we received are very good,” commented ESA’s Director of Technical and Quality Management, Michael Courtois. 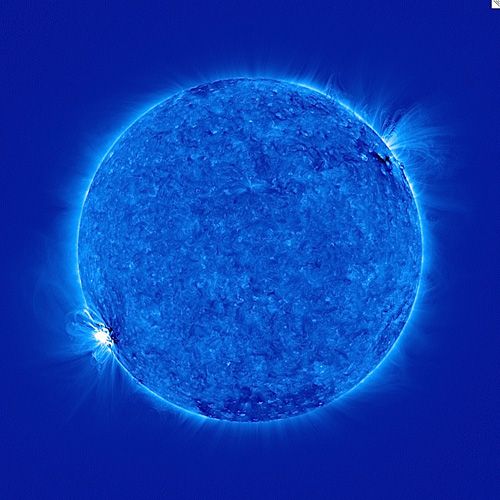 Extreme ultraviolet image of the Sun as seen by ESA’s Proba-2 spacecraft.  (Image courtesy of ESA)

The new images of the Sun from Proba-2 have been made possible with a new digital camera based on Active Pixel Sensor technology. The TCD Solar Physics Group, in close cooperation with researchers at the Royal Observatory of Belgium, have led the development of object-oriented data analysis software for the archiving, distribution and scientific analysis of images from Proba-2. Commenting on the significance of the new technology, Dr Gallagher said: “It is the first time that object-oriented data analysis software has been developed for images from an ESA spacecraft, and is likely to form the basis for software for future missions, such as ESA’s  €450 million Solar Orbiter satellite, scheduled for launch in 2018.”

“The images that Proba-2 provides will improve our understanding of solar storms which will ultimately allow us to make more accurate prediction of the arrival times and impacts of these potentially catastrophic events at Earth,” added Dr Shaun Bloomfield, a Marie Curie Research Fellow on  the TCD Solar Physics team.

The TCD team has also been responsible for integrating Proba-2 images into the near real-time space weather monitoring system, www.SolarMonitor.org. This will facilitate the widespread distribution of Proba-2 image to the wider solar and space weather communities.

Ireland has been a member of ESA since 1972 and today there are almost 50 companies in Ireland working on software and hardware development for ESA. The TCD Solar Physics Group is leading the way in many aspects of space science, from software development for NASA and ESA satellites, to studying the fundamental physics of solar storms and their effects on Earth.