Researchers from Trinity College Dublin have uncovered the evolutionary mechanisms that have caused increases or decreases in the numbers of chromosomes in a group of yeast species during the last 100-150 million years.  The study, which was recently published in the open-access journal PLoS Genetics, offers an unprecedented view of chromosome number changes in a large group of related species.

TCD post-doctoral fellow, Dr Jonathan Gordon was lead author of the study, conducted in the laboratory of Professor of Genome Evolution at the School of Genetics and Microbiology, Kenneth Wolfe.  The research was supported by Science Foundation Ireland.

A few specific cases of chromosome number changes have been studied in plants and animals, most notably the fusion of two great ape chromosomes that gave rise to chromosome 2 in humans, giving humans a chromosome count of 23 pairs compared to 24 pairs in great apes.  The family of yeasts studied in this new research spans a similar evolutionary distance to that of vertebrates.  The availability of completely sequenced genomes facilitated the reconstruction of ancestral genome structures at different evolutionary time points.  Tracing the positions of essential parts of chromosomes (centromeres and telomeres) through time allowed for the identification of specific genome rearrangement events that resulted in chromosome complement changes. 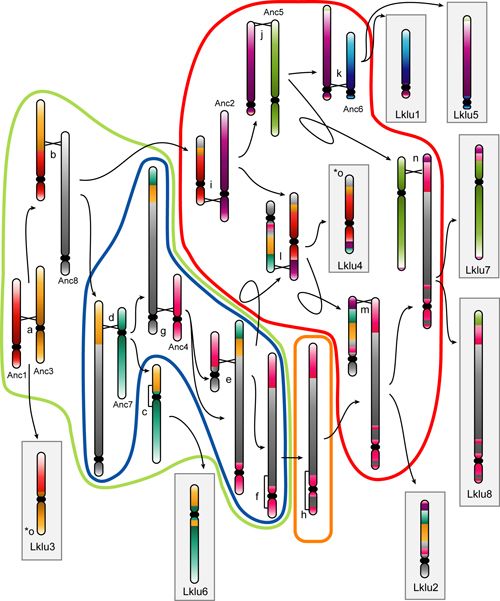 The addition of large numbers of genes is not often tolerated by cells, and neither are deletions of large numbers of genes.  This restricts the types of possible changes in chromosome complement to rearrangements of genes on chromosomes that maintain the same number of genes.  Although some aspects of the research are specific to yeast, many of the mechanisms of chromosome number change in yeast are similar to those found in other organisms and therefore shed light on how chromosome complements evolve.

The researchers show that, in yeasts, chromosome complement has decreased in all except one notable event, a whole genome duplication – an event that doubled the complement of an ancestor of several of the species from 8 chromosomes to 16.  The decreases in chromosome number were mostly by the fusion of whole chromosomes, similar to the one that gave rise to chromosome 2 in humans.  One exception to this mechanism was the breakage of a chromosome and the subsequent fusion of the two broken edges to two different chromosome ends.

The full study, ‘Mechanisms of Chromosome Number Evolution in Yeast’, can be accessed at http://www.plosgenetics.org/article/info:doi/10.1371/journal.pgen.1002190