The debating team of Trinity College’s Historical Society took the honours for the fourth year in a row at this year’s Irish Times Debate, the 50th anniversary of the event.  The winners, Niamh Ní Mhaoileoin and Niall Sherry, beat off competition from debaters from five third level institutions to win the Demosthenes Trophy.  Debating against the motion ‘This House Believes that Ireland Owes a Debt of Gratitude to Fianna Fáil 1926 – 2010’, the winning team achieved a confident victory to take the prestigious prize. 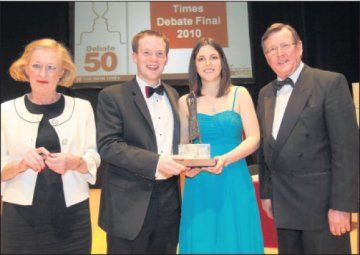 The winning Trinity team will represent Ireland along with Seán O’Quigley of Griffith College, the individual winner on the evening, on a debating tour of the best debating colleges in the United States.

The Irish Times Debating championship was established in 1960 to promote excellence in oratory and debating and is open to students in higher education in both the Republic of Ireland and Northern Ireland.  This year a total of 284 students entered the competition for one of the twelve places at the final.