The success of health, economic and climate resilient strategies in Africa were the focus of an international conference in Trinity College Dublin, which formed part of Africa Day celebrations.

The conference, Africa Rising – New Paradigms in Development in Post 2015 Africa, was organised by Trinity International Development Initiative (TIDI), with the support of the African Ambassadors to Ireland. The event forms a key part of this year’s Africa Day programme, which marks the 50th anniversary of Africa Day and African unity. 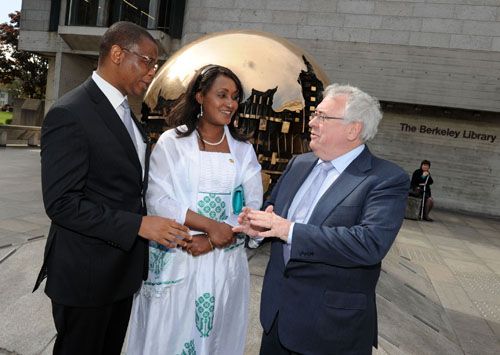 Speaking at the conference, Minister for Trade and Development, Joe Costello said: “It is pleasure to participate once again in Trinity’s International Development Initiative Conference (TIDI) to mark Africa Day. The theme of this year’s Conference is of particular interest as the new global development global framework which will replace the Millennium Development Goals after 2015 has been central to Ireland’s Presidency of the EU this year.”

“Moreover, I have recently launched Irish Aid’s new development policy, One World, One Future, which will refocus our relationship with Africa. The global community has made major progress in fighting poverty since the MDGs were agreed in the year 2000.  They have helped identify where progress has been made and galvanise efforts in areas that are lagging.”

“This progress should not be taken for granted, and much remains to be done.  As part of our EU Presidency, Ireland has prioritised progress on a number of crucial issues: ensuring a strong and coherent EU voice after 2015; forging stronger links between emergency humanitarian relief and long term development aid, and ensuring that linkages between hunger, nutrition and climate change are established and addressed.  We will continue to work in close cooperation with our partners to progress these important issues.”

Professor Martina Hennessy, Associate Professor in Medical Education, School of Medicine, Trinity College Dublin and Chair of the Trinity International Development Initiative (TIDI), said: “We are delighted to host a conference addressed by such distinguished speakers, looking at case studies of positive change coming from Africa, while also focusing in the challenges that remain.  Health, economics and strategies to combat the detrimental effects of climate change are challenges faced the world over and today’s conference focuses on the success stories where these difficult issues have seen change for the better.”