Researchers at CRANN and Trinity’s School of Physics have created an innovative new device that will emit single particles of light, or photons, from quantum dots that are the key to practical quantum computers, quantum communications, and other quantum devices.

The team has made a significant improvement on previous designs in photonic systems via their device, which allows for controllable, directional emission of single photons and which produces entangled states of pairs of quantum dots.

Qubits and the promise of quantum computing

Scientists are exploring different options and designs to make quantum computing a viable reality. One proposed idea utilises photonic systems, making use of quantum properties of light at the nanoscale, as qubits. The Trinity team explores such a system in their recently published paper in the high-profile journal Nano Letters.

Their system utilises single photons of light emitted in a controlled fashion in time and space from quantum emitters (nanoscale materials known as quantum dots). For applications such as quantum computing, it is necessary to control emissions from these dots and to produce quantum entanglement of emission from pairs of these dots.

Quantum entanglement is a fundamental property of quantum mechanics and occurs when a pair or group of particles are quantum-mechanically linked in a way such that the quantum state of each particle of the pair cannot be described independently of the state of the others. Essentially, two entangled quantum dots can emit entangled photons. 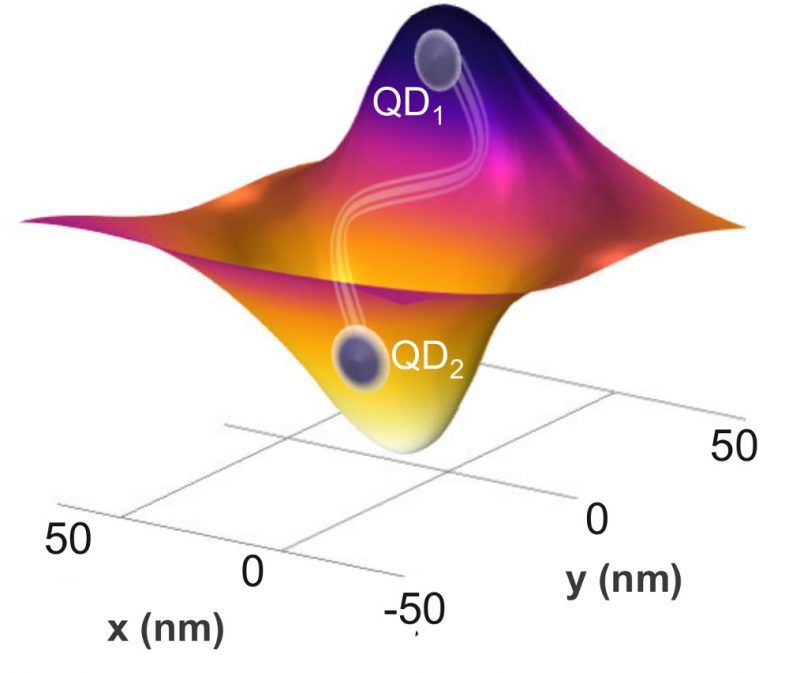 “The device works by placing a metal tip within a few nanometers of a surface containing the quantum dots. The tip is excited by light and produces an electric field of such enormous intensity that it can greatly increase the number of single photons emitted by the dots. This strong field can also couple emission from pairs of quantum dots, entangling their states in a way that is unique to quantum emitters of light.”

The other significant advantage is the mechanism by which the device works over current state-of-art photonic devices for quantum computing applications.

“By scanning the metal tip over the surface containing the quantum dots, we can generate the single photon emission as required. Such a device is much simpler than current systems that attempt to fix a metal tip, or a cavity, in close proximity to a quantum dot. We now expect that this device and its operation will have a striking effect on research in quantum emitters for quantum technologies.”

The collaboration between Professors Hess and Donegan began while Professor Hess was at Imperial College London and will continue with his recent appointment to Trinity through the SFI Research Professorship Programme.

The team plans to fabricate devices that will demonstrate controlled single photon emission and contribute strongly to the research effort in quantum technologies in Ireland.