The Board of Dublin Molecular Medicine Centre (DMMC) is delighted to announce that Dr. Ruth Barrington has been appointed as Chief Executive Officer of the company. Dr. Barrington will take up the position on October 1st, 2007, following the end of her contract with the Health Research Board, where she has been a very successful CEO for nine years.

“Dr. Ruth Barrington brings her substantial experience and track record to the DMMC at an exciting time for this major biomedical research collaboration between Trinity College Dublin; University College, Dublin and the Royal College of Surgeons in Ireland. University College, Cork, and National University of Ireland, Galway, are shortly to join the collaboration and the DMMC will become known as Molecular Medicine Ireland (MMI). MMI will align the activities of all five of Ireland’s premier biomedical research institutions and seven affiliated teaching hospitals. It will create a critical mass and centre of excellence in molecular medicine research and education, facilitating cross-institutional collaboration and enhancing translational research capability.”

“I am pleased to be taking up this important and challenging position, especially at this pivotal time in the translation of research into tangible benefits for improved health and economic progress in Ireland. “

Further information on the Dublin Molecular Medicine Centre
Established in 2002, with funding from the Higher Education Authority as part of Ireland’s National Development Plan, the DMMC is major biomedical research collaboration between Trinity College Dublin; University College, Dublin, and the Royal College of Surgeons in Ireland.

Dr Ruth Barrington has been the Chief Executive of the Health Research Board (HRB) since 1998. The HRB is the chief funding agency for competitive, peer reviewed health research in Ireland and is a major provider of research and information services to the health system.

Dr Barrington is a graduate of University College Dublin, the College of Europe in Belgium and was awarded a Ph.D from the London School of Economics. She was awarded an honorary degree in laws by the National University of Ireland, Maynooth in May 2005 and is a Trustee of the Irish Times.

Other
Author of Health, Medicine and Politics in Ireland, 1900-1970 and other publications on health and research policy.
Member of the interim Board of the Health Information and Quality Authority.
HRB representative on the Ireland/Northern Ireland/National Cancer Institute Cancer Consortium since its foundation in 1999.
Chair of the Monitoring Group on the Implementation on ‘A Vision for Change’, the Government’s mental health strategy.
Irish representative to the European Strategy Forum on Research Infrastructure (ESFRI) and chair of the Working Group that prepared proposals on research infrastructure for biology and medical science that were included in the European Roadmap for Research Infrastructure (2006). 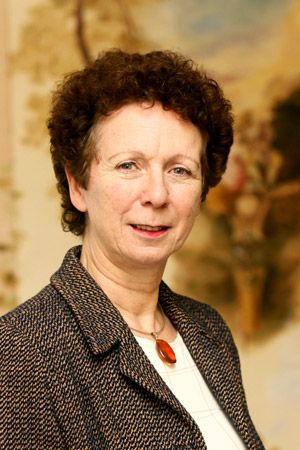