Response to Covid-19 shows striking similarities with pandemics past

Be it quarantine or social distancing, responses to the current Covid-19 pandemic have not changed much since the pandemics of the past, speakers noted in the Behind the Headlines discussion Plagues and Pandemics which was livestreamed to over 7000 viewers on Thursday evening, March 26th 2020.

The Trinity Long Room Hub is Trinity’s research institute for the Arts and Humanities, and in its latest Behind the Headlines discussion, speakers from diverse disciplines recounted Martin Luther’s take on social distancing in the 16th century and representations of plague in Chaucer and Boccaccio’s works to outline what we can learn from past pandemics. 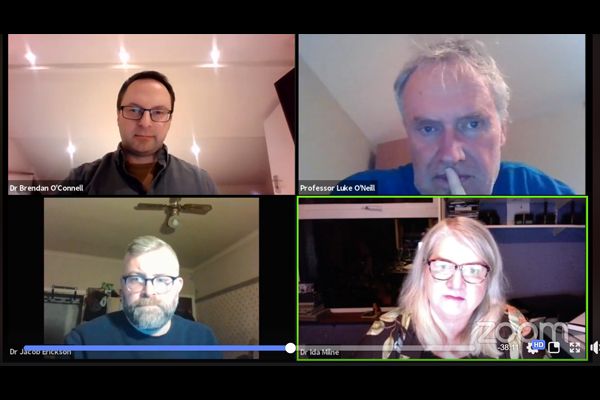 Dr Brendan O’Connell of Trinity’s School of English, spoke of the infamous Black Death and the literary responses to “the most lethal pandemic in history”, which is estimated to have killed half the population of England in the first outbreak in the 14th century.

The Black Death originated in the Tibetan plateau, Dr O’Connell explained, spreading to Europe along the Silk Road and finally via Venetian and Genoese trading ships.

Despite a widespread belief that the plague was ‘the wrath of god against a sinful people’, Dr O’Connell said he was struck by the similarities to today’s pandemic where restrictions were placed on the movement of people and the trading of goods. Most remarkably, he noted that “guidance was issued on who was permitted to attend funerals; those who’d had close contact with the dying were required to quarantine themselves.”

He noted similarities to the current pandemic in historical and literary representations of pandemics past for both good and bad saying:

Then, as now, witnessing a rapidly transmissible and lethal illness reminds us that the profound connectedness of human beings is a source of vulnerability and fragility but also of solidarity and strength.

Dr Jacob Erickson, of Trinity’s School of Religion, said that pandemics, plagues and pestilence “have long extravagant religious and theological histories”, as he spoke about the ethical implications of the current pandemic.

Quoting Martin Luther during the spread of the plague in his hometown of Wittenberg, Dr Erickson highlighted his statement at the time: “I shall avoid places and persons where my presence is not needed…in order not to inflict and pollute others”, continuing however to suggest he would not turn down assistance to his neighbours.

Stories of apocalypse from Exodus to Hollywood blockbusters tell us something about humanity while they also serve to uncover deeper truths about society, and ourselves, Dr Erickson noted.

He said that during Covid-19, we might be experiencing an apocalypse of a certain way of living:

The temptation will be for many of us to ask what does it take to get to some semblance of normalcy, but I’m wondering if normalcy shouldn’t be the goal – normal wasn’t good for everyone.

Professor Luke O’Neill has been to the fore in providing reliable and proactive advice to the public about Covid-19 through media appearances on TV, radio and in print where he shares his expertise as an Immunologist at Trinity College Dublin.

Our response to this current pandemic is no different to what it would have been 200, 300, 400 years ago –the main response is quarantine.

He remarked that it was “sobering” that despite advancements in immunology, virology and medicine since the influenza pandemic of 1918, “nothing really has changed in how we’re handling this virus.”

The history of immunology is the history of infection Professor O’Neill commented, outlining how he is dependent on viruses to make new discoveries about the immune system.

Although the response to Covid-19 could also be described as “medieval” in terms of the use of quarantine, Dr O’Neill argued that with 35 companies now racing to make a vaccine, the next phase to this pandemic will be “21st century.”

At the time of the 1918-19 ‘Spanish flu’, viruses had not yet been discovered, as Ida Milne also noted in her account of the “biggest killing influenza pandemic that the world has ever known.”

Her research focuses on the societal impacts of the 1918-19 flu pandemic, which killed upwards of 50 million people across the world. Fear of the unknown and things we can’t control, are just some of the societal impacts, which ring true today also, Dr Milne noted.

Doctors thought the influenza was a bacterial infection, throwing all types of cures at it, including “whiskey and brandy”, the historian remarked.

Poignantly, she spoke of the support from voluntary groups at the time, with soup kitchens and distribution of food to those in need, and a lot “of neighbours helping neighbours.”

In Ireland, death and illness resulted in much hardship for families, Dr Milne concluded.

These pictures will sadly be mirrored in the coming weeks but we hope not to the same extent.

About Behind the Headlines at the Trinity Long Room Hub
The Trinity Long Room Hub’s Behind the Headlines discussion series offers background analyses to current issues by experts drawing on the long-term perspectives of Arts & Humanities research. It aims to provide a forum that deepens understanding, combats simplification and polarization and thus creates space for informed and respectful public discourse.

The next Behind the Headlines event will take place online on April 7th 2020 at 7.30pm on ‘Climate in a time of Pandemic’.  Details will be available on the Trinity Long Room Hub website shortly.