Trinity’s Centre for Post-Conflict Justice aims to foster interdisciplinary research, exploring how societies come to terms with episodes of extreme violence in war, civil war, and periods of prolonged civil and political unrest. 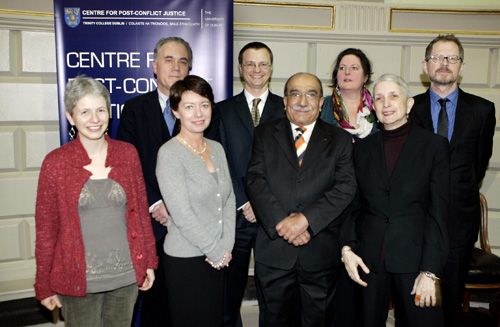 Professor Kader Asmal is also former Minister of Education (1999-2004) and Minister of Water Affairs and Forestry in the Mandela Government (1994-1999).  During his career, Professor Asmal has authored numerous books and articles on apartheid, decolonisation, labour law and the environment.  His achievements include being awarded the Prix UNESCO for human rights teaching (1983), the Stockholm Water Prize (2000) and the Gold Medal of the World Wide Fund for Nature (1996).  He was conferred with an Honorary Doctor in Laws (LL.D) from Trinity College Dublin in 1988 and is Honorary Fellow of the London School of Economics and the Royal College of Surgeons in Ireland.