Trinity’s Professor of Pathology, John O’Leary, Consultant Histopathologist at St James’s Hosptial and Director of Pathology at the Coombe Women and Infants University Hospital was presented with a Lifetime Achievement Award at the 6th annual Oxford RNAi conference recently for his extraordinary contribution to cancer medicine.  During his career, Professor O’Leary has made several key findings specifically in the areas of cervical cancer and ovarian cancer and has an international reputation in cancer medicine.

His work in cervical cancer and pre-cancer has led to a novel set of molecular biomarkers which have direct diagnostic and prognostic value in cervical pre-cancer and cancer diagnosis.  At the conference Professor O’Leary presented exciting new research into the molecular targeting of human papillomaviruses (HPV) cancer causing genes related to cervical cancer and the role of miRNA-21, a type of gene controller/regulator in cancer,  to an audience made up of leading scientists from academia and industry, postdoctoral researchers and students.  Generally, microRNA-21 is over expressed in most human cancers and regulates the expression of many tumour suppressors.  During his address Professor O’Leary highlighted a new theory on the role of miRNA-21 signalling in ovarian cancers providing new diagnostic and therapeutic approaches in these cancers.

Professor O’Leary’s pathology research group at Trinity’s Department of Histopathology and Morbid Anatomy has gained an international reputation in the areas of cervical, ovarian, thyroid, prostate and virally-driven cancers.  The group is funded by the Health Research Board, Ireland; the Cancer Society; the Emer Casey Foundation; the Meath Foundation; the Royal City of Dublin Trust; Friends of the Coombe; Science Foundation Ireland and the European Union. 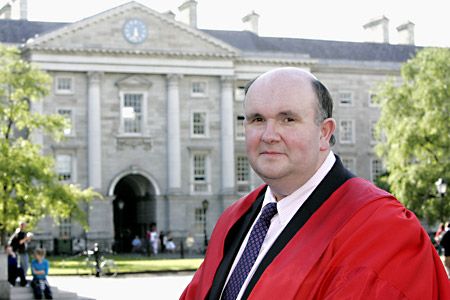