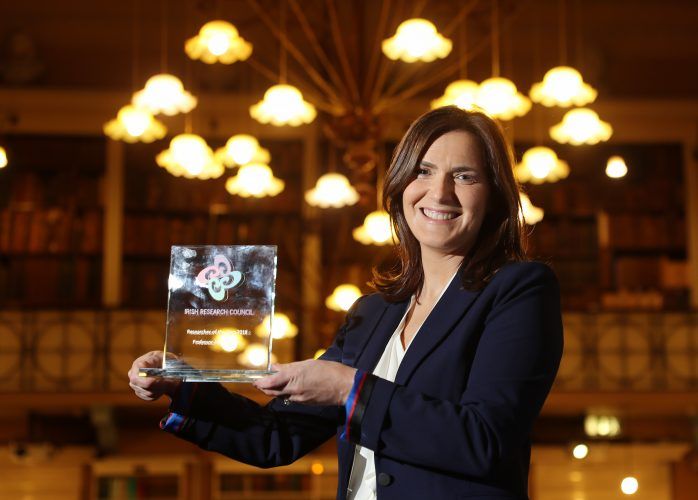 Now in their second year, the Researcher of the Year awards recognise and commend the very best of the IRC’s current awardees or alumni working in academia, industry, civic society or the public sector.

I was delighted and honoured to receive the Irish Researcher of the Year award. The Irish Research Council has supported my research in so many ways, from small seed funding to large grants. They have also been absolutely pivotal in supporting the internationalisation of my research profile, supporting me to secure a prestigious grant from the European Research Council. I am eternally gratefully for this.

In addition to Professor Davies’ success, two postgraduate researchers from Trinity—Joanna Poetz and Hannah Prendeville—won Medals of Excellence, which are awarded to early-career researchers.

Each Medal has been named after previous Chairs of the IRC and recognise excellence in the 2018 postgraduate and postdoctoral funding calls run by the Council in science, technology, engineering and mathematics (STEM), and the arts, humanities and social sciences (AHSS).

Dr Karen English (Maynooth University) and Dr Brian Egan (Wood Plc.) were also among the winners, securing the Early-Career Researcher of the Year and Alumnus of the Year awards respectively.

Congratulating the awardees, Chair of the Irish Research Council, Professor Jane Ohlmeyer, who is also Director of the Trinity Long Room Hub, said:

I am delighted to congratulate Professor Anna Davies, Dr Karen English and Dr Brian Egan on receiving their awards.

Each of the winners represent very different research disciplines, demonstrating the breadth of excellent research that is currently being funded by the Council and underway in Ireland – the impact of which ripples through multiple aspects of Irish life.

Having a vibrant research community – and strong public support for research – is more important than ever. The Researcher of the Year awards are all about recognising the excellence in the sector and how important research is for society, the economy, and our higher education system.

We received many nominations of current and previously Council-funded researchers. All three of the awardees were selected for their outstanding track records to date and I would like to wish them all the very best in their future careers.