Addressing the TCD Historical Society this week on the subject of Economics in the Global Sphere, Professor Jeffrey Sachs stated that the world is on a trajectory that is both unsustainable and extremely dangerous.  Citing global trends as a basis for his argument Professor Sachs who is special advisor to the UN Secretary General, Ban Ki-Moon, said: “The impact of society on our physical earth and the physical environment is an unprecedented challenge.”

During his speech Professor Sachs spoke about how globalisation and over processing of the world’s natural resources has caused a change in the earth’s climate affecting hundreds of millions of people.  He went on to state that these unsustainable problems are not limited to climate change and are compounded by economic growth, highlighting that for the first time in history the world is “intensely and completely” interconnected.  Calling on the next generation to develop sustained and more equitable progress around the world, Professor Sachs said the challenge for the future will be adjusting to and responding effectively to climate change. 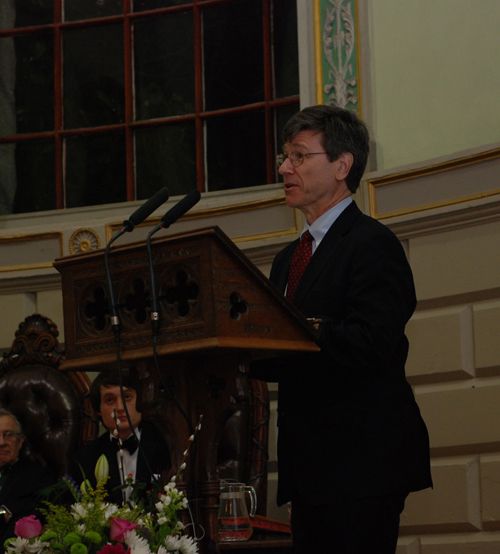 Professor Sachs is a leading economist and one of the world’s leading experts on sustainable development.  Throughout his career he has worked in an advisory capacity for governments in Latin America, Eastern Europe, Asia and Africa, as well as international development agencies.  He has also authored numerous books including the bestsellers The End of Poverty and Common Wealth: Economics for a Crowded Planet.

Other speakers on the night included Professor Patrick Cunningham, Chief Scientific Advisor to the Government, who discussed the uneven distribution of wealth in the world; Joan Burton TD who spoke about how to better manage the global economy and Senator Shane Ross who focussed on the current global economic downturn and lessons that should be learnt for the future.