Irish writer Sebastian Barry was among participants in a public reading of the work of Italian author Primo Levi at an event to mark International Holocaust Remembrance Day in Trinity College Dublin on Thursday, January 25th, 2018. The event took place last week in advance of the UN annual International Day of Commemoration in memory of the victims of the Holocaust  on January 27th on the anniversary of the liberation of the Auschwitz death camp in 1945.

To mark the remembrance day Trinity hosted a reading of the English translation of Primo Levi’s ‘Canto of Ulysses’ from his If This is a Man. Readers at the event were Irish writer Sebastian Barry, arts consultant Catherine Punch and art dealer Oliver Sears, son of a holocaust survivor. The event is organised by Trinity’s Herzog Centre and Centre for Literary Translation in collaboration with the Italian Institute of Culture, Dublin. 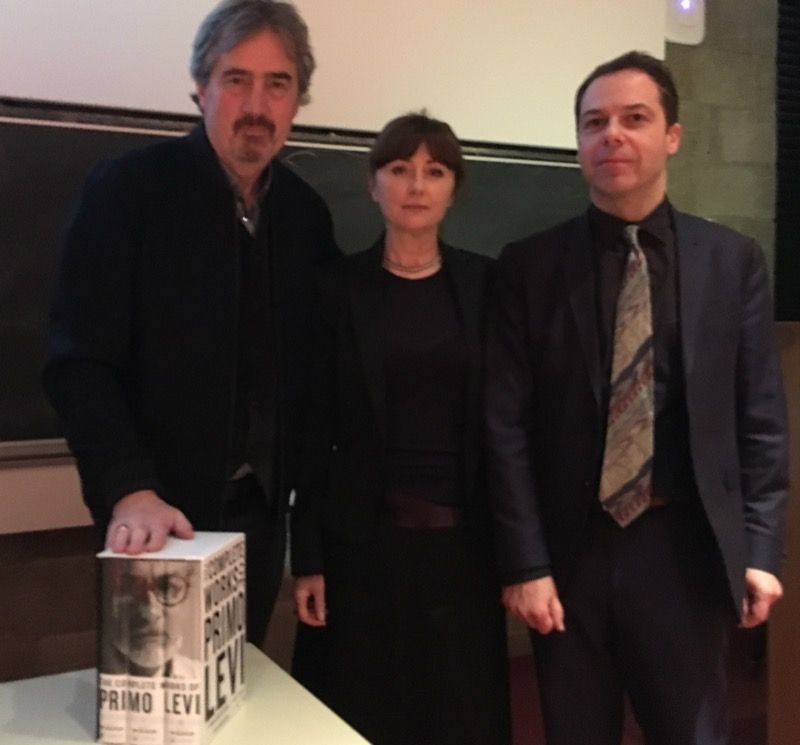 Primo Levi (31 July 1919 – 11 April 1987) was an Italian Jewish chemist, writer, and Holocaust survivor. Levi was deported to Auschwitz in February 1944, where he spent the next 11 months until the liberation of the camp. His If this is a Man was first published in Italian in 1947 but only started to gain the world’s attention as an important record of the atrocities he witnessed on its re-publication in 1958. If this is a Man has been recognised as one of the great books of the 20th century. Levi continued to write until his death at the age of 67. His works include The Truce, The Periodic Table, The Drowned and the Saved, and If Not Now, When?. The Complete Works of Primo Levi (edited by Ann Goldstein) was published in 2016.

Trinity College Dublin’s Herzog Centre at the School of Languages, Literatures and Cultural Studies, organises a number of events each year focussing on the Holocaust and Jewish history and culture. In collaboration with Holocaust Education Trust Ireland the Centre also offers a Certificate in Holocaust Education for school teachers.

Next week Trinity will host the Annual Holocaust Memorial Lecture which will be given by historian Dr Zoe Waxman, Centre for Hebrew and Jewish Studies, University of Oxford, on ‘Women in the Holocaust: Lost Stories of the Shoah’ on Tuesday 7th February at 7.30pm in the Burke Theatre, Arts Building, Trinity. The annual lecture is organised by the Herzog Centre and the Department of History, Trinity and the Holocaust Education Trust Ireland.

More about the readers:

Sebastian Barry was born in Dublin in 1955. His novels and plays have won, among other awards, the Kerry Group Irish Fiction Prize, the Costa Book of the Year award (2008, 2017), the Irish Book Awards Best Novel, the Independent Booksellers Prize and the James Tait Black Memorial Prize. He also had two consecutive novels, A Long Long Way (2005) and The Secret Scripture (2008), shortlisted for the MAN Booker Prize.

Catherine Punch has worked for a range of cultural organisations including the Screen Directors’ Guild of Ireland, Irish Museum of Modern Art, Anna Livia International Opera Festival, Blue Like an Orange Theatre Co. Her BA is in Theatre Studies & Classics from Trinity College Dublin.

Oliver Sears is a Dublin based, art dealer & gallery owner. Born in London in 1968, he has lived in Ireland for over 30 years. He sits on the board of Holocaust Education Trust Ireland and is a frequent contributor to radio programmes and newspapers. He talks to students about the Holocaust and participates in panel discussions. Oliver’s mother, Monika Sears, is a Holocaust survivor.