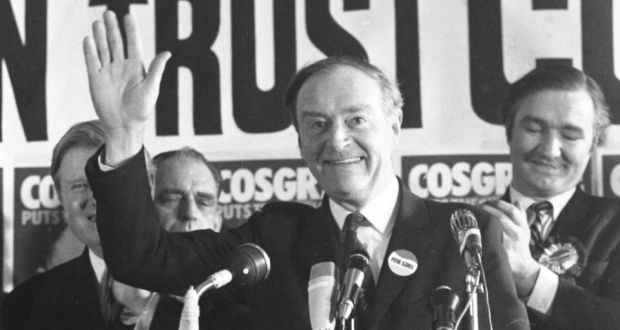 It is hard to imagine today the crises facing the Irish economy in the early 1970s. These were the oil shock of October 1973, which saw a quadrupling of oil prices, and the seriously escalating troubles in the North. Both posed potential existential threats to the economy. These were the essential backdrops to the national coalition government of 1973 to 1977 under the leadership of Liam Cosgrave.

The oil shock led to an immediate reduction in livings standards in Ireland, as we had to pay so much more for the same quantity of oil imports, vital to the running of the economy. This in turn led to higher inflation, on top of the inflation problems that had emerged in the years prior to 1973.

Of much greater concern, though, was the realisation that the Opec countries, given their almost monopoly control of oil production then, could at any time bring the western economies to their knees by cutting off vital supplies. The mood of despair in Ireland and the western world was palpable, with few expecting recovery any time soon.

At the same time there was a deterioration in the Troubles in the North with the collapse of the Sunningdale power-sharing executive in May 1974. There was a real fear of British withdrawal following this and hence of possible civil war. Cosgrave knew full well that respect for the rule of law and political stability are the sine qua non for a properly functioning economy.

Ireland had also joined the then European Economic Community in early 1973, one of the most important economic and political events to occur in the history of the State. It changed the nature of Irish economic policy significantly and led in time to a critical reassessment of Ireland’s relations with its large neighbouring state. It also though primarily led to a sense of hope for a better economic future.

The inflation problems that arose worldwide in the early 1970s, culminating in the impact of the oil shock, led in itself to very difficult policy decisions in Ireland. There were price increases in some years of 15 per cent or more, something almost unimaginable now.

Liam Cosgrave: A life in pictures

The understandable response of workers was to seek compensating wage increases and more, thereby threatening a spiral of rising inflation, with all of its damaging effects. This, then, was a very testing time for industrial relations in Ireland and hence for Cosgrave’s coalition government.

The Labour Party, as partner in the coalition, also tried to address the social aspect of policy, one of the most eyecatching changes it had introduced being that of a wealth tax, abandoned a few years later by the incoming Fianna Fáil government. The lessons learned from this were twofold: that capital is highly mobile internationally, and that the valuation of wealth is extremely costly, if not impossible in some cases.

Severe public-finance problems emerged as the government tried to cope with the downturn through expansionary budgetary policy. There were real concerns expressed about high government borrowing, but these were minor compared with what materialised in the 1980s.

Despite all of the gloom there was a remarkable turnaround in the Irish economy in 1976 and 1977, prompting much international comment. The Guardian ran two very favourable pieces on Irish economic performance under the questionable headline “The little people who found the crock of gold”. There was similar praise and some bemusement in the Economist. These years also witnessed the first net inward migration to Ireland, after more than a century of large net outward migration.

One interesting postscript was the deferral of the census in 1976, on cost grounds. Garret FitzGerald opposed the deferral and thought it a panic measure in the face of financial difficulties. He of course had perhaps a much greater sense than Cosgrave of the importance of reliable statistics to the formulation of economic policy.

One can describe how an economy performs during certain years, in this case that of Cosgrave’s national coalition government. How much that performance is due to the government of the day, to decisions made before its coming to power, or to external factors is always open to debate.

What we know for sure is that Cosgrave faced almost existential threats after coming to power in 1973, but also having the advantage of Ireland’s being already a fully fledged member of the EEC.

What we also know is that by the end of his period as taoiseach the economy was performing well enough to draw favourable international economic comment.