Nine researchers from Trinity College Dublin are among the 39 in Ireland to have secured prestigious Fulbright Awards for 2016/17. US Ambassador to Ireland, Kevin O’Malley, and Ireland’s Minister of State for Gaeltacht Affairs & Natural Resources, Seán Kyne TD, announced the new Fulbright Irish Awardees at the Ambassador’s Residence in Dublin.

Kevin O'Malley said: “I warmly congratulate the 2016-2017 cohort of Awardees. The Fulbright Awards are highly competitive, globally recognized, and associated with excellence and prestige…so this is a real accomplishment. We are proud to have such bright minds embarking on educational and cultural exchanges to the US, and we look forward to seeing the fruits of their studies and research when they return to Ireland.”

Since 1957, the Fulbright Awards are given annually by the Irish and US governments, providing Irish students, scholars, and professionals the opportunity to study, research or teach at top American institutions. 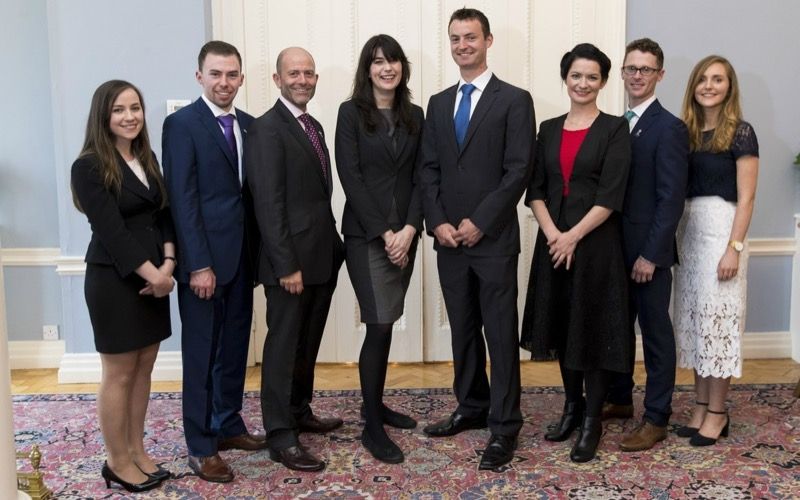 These all-discipline awards facilitate knowledge-sharing and cultivate connections between Ireland and the US. The Fulbright Program runs in 155 countries worldwide, giving awardees access to an ever-growing network of international expertise.

Minister of State for Gaeltacht Affairs & Natural Resources, Sean Kyne TD, said: “I am thrilled with the level of prowess we see in this year’s Fulbright Irish Awardees. The 39 recipients come from varying professional and academics backgrounds including Law, Language Studies, Music, History, Psychology, Archaeology, Ecology, Engineering, Biomedical Sciences, mHealth and Cybercrime. While in the US, they will not only gain knowledge and expertise in their fields, they will also act as Ambassadors for Ireland, upholding Senator J. William Fulbright’s wish to expand the boundaries of human wisdom, empathy and perception through education."

"For us, promotion of the Irish language is a key element of this goal to share knowledge beyond borders. With the support of the Department of Arts Heritage and the Gaeltacht and the National Lottery, the Fulbright Commission will send nine Foreign Language Teaching Assistants (FLTAs) to the US this August to teach Irish language and culture. Past FLTAs have helped establish GAA Teams and Irish cultural events that still flourish in the US to this day – they have made a mark, and we have no doubt that this year’s group will do the same. We will welcome 62 US citizens to Ireland as Summer Gaeltacht Awardees shortly. They will stay in Gaeltacht regions for 4-6 weeks to learn more about Irish culture and language. Indeed, many of these Awardees were introduced to the Irish language by former Fulbright FLTAs who taught at their US universities."

"Whatever your field of expertise, I strongly recommend students, scholars and professionals to apply for a 2017-2018 Fulbright Award this September. From speaking to those who have embarked on this journey to date, I know it is a worthwhile one which can open many doors for you on both sides of the Atlantic.”

1.        Dr Eva Barrett is an Adjunct Assistant Professor at Trinity. Eva will deliver guest lectures and work on the research and curriculum development project ‘Developing Energy Law in the EU & Comparing the Regulation and Liberalisation of Energy Markets in the US with the Regulation and Liberalisation of Electricity Markets in the EU’ in Vermont Law School’s Institute for Energy and the Environment.

2.       Dr Linda Buckley is a composer and lecturer of Music at Trinity. She will travel to New York and research found sound/electronic and cross-genre musical composition, in affiliation with New York University.

3.       Mr Ronan Doorley is a PhD candidate in Civil Engineering at Trinity College Dublin. At the Massachusetts Institute of Technology, he will investigate the application of data science and machine learning techniques to the design of innovative urban mobility systems.

4.       Ms Rosemary Hennigan graduated with an LLB from Trinity and has since qualified as a solicitor with McCann FitzGerald. Rosemary will complete an LLM at the University of Pennsylvania where she intends to focus her studies on public oversight measures and the use of parliamentary committees in the US political system.

5.       Dr Andrew Jackson is Associate Professor in Zoology at Trinity. Andrew will visit the Scripps Institution of Oceanography at the University of California San Diego to develop new mathematical models to track near-realtime changes in the species communities of impacted marine ecosystems using stable isotope analyses.

6.       Ms Aisling Murray has completed an LLB at Trinity College Dublin. Aisling will be researching private law theory at the University of Chicago, taking a critical approach to the law governing private relationships, in an effort to assess methods of empowering weaker sections of society.

7.       Mr Eoin Mac Réamoinn is a PhD candidate in Trinity. Eoin will carry out research to determine the role that immune system genes play in embryonic development at the Whitehead Institute for Biomedical Research at the Massachusetts Institute of Technology.

8.       Dr Anthony Quinn is an Associate Professor in Electronic and Electrical Engineering at Trinity. He will join the laboratory of Michael Jordan at UC Berkeley, focusing on problems where Bayesian signal processing and machine learning meet.

9.       Ms Saskia Ryan is a PhD candidate in Geology at Trinity. Saskia will undertake research at the Department of Human Evolutionary Biology at Harvard University. She will use a geochemical approach to study ancient mobility in Ireland by comparing baseline environmental signatures to those preserved in archaeological human teeth and bone.

Dr Dara FitzGerald, Director of the Fulbright Commission in Ireland said: “The calibre of Fulbright Awardees this year is exceptional and I know they will thrive as cultural Ambassadors in the US and when they return. It has been a personal pleasure this year to engage with all candidates.

"We would like to acknowledge the incredible support that the Department of Foreign Affairs, the US Department of State, the Department of Arts, Heritage and the Gaeltacht, and the National Lottery give us – this ensures the continuity of Fulbright Awards and knowledge-sharing between the US and Ireland. Substantial recognition and thanks also goes to our Award sponsors – CRH, Geological Survey of Ireland, Enterprise Ireland, Environmental Protection Agency, the Marine Institute, National University of Ireland, University Penn Law and University of Notre Law School. We are delighted to welcome the Hugh Lane Gallery, Uversity, AMBER, Geological Survey of Ireland and INFANT on board this year as sponsors of new Fulbright US Awards which allow American students and academics to share their culture and expertise with Irish institutions.”