‘Business as usual’ is not a sustainable option when it comes to developing policies on extracting food from the oceans, according to a new evidence review report developed for the European Commission with contributions from a Trinity environmental history expert.

The publication, ‘Food from the Oceans’, is the first evidence review report published by SAPEA (Science Advice for Policy by European Academies) which examines the question of how the ocean can help satisfy the global demand for food. Professor Poul Holm, Professor of Environmental History, Trinity chaired one of the working groups of experts from across Europe and the European Academy Networks which produced the report.

The report warns that the environmental footprint and costs associated with today’s food production methods and other food system activities are considerable: “The oceans are home to a large number of resources that are either not exploited or are marginally exploited currently and which could improve food security and the wellbeing of humanity. Increased food production from the ocean could release some of the pressure that has been put on agriculture, as well as supporting a range of livelihoods and activities associated with the fishing and mariculture industries.”

“It is clear that ‘business as usual’ is not sustainable from social, economic and environmental viewpoints. The environmental footprint and costs associated with today’s food production methods and other food system activities are considerable.” 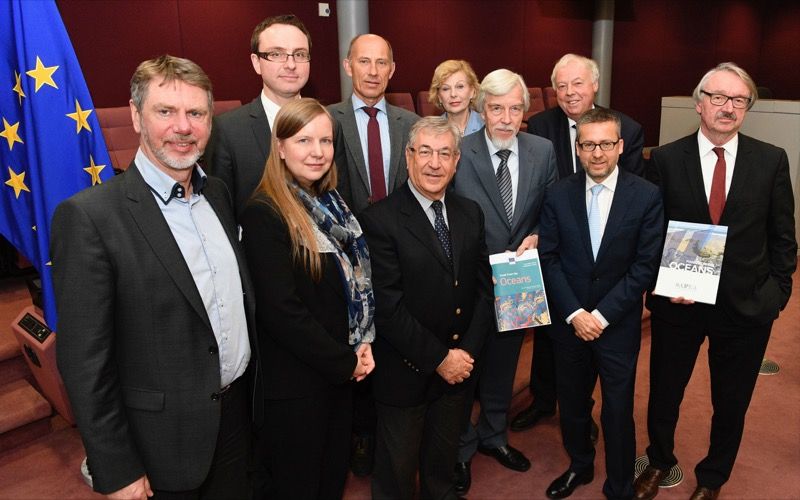 The report suggests a number of options, which inform the recommendations of European Comissions's high level group scientific opinion. It states that the only way to obtain significantly more food and biomass sustainably from the ocean is to harvest seafood that on average is from a lower trophic level (lower in the food chain) than we currently harvest.

Commenting on the publication of the report, Prof Holm said: “Policy needs to be backed up by scientific evidence, and I am delighted that the Commissioners for Research and for Fisheries welcome our report. We have brought together a vast amount of findings and insights to provide the best possible backdrop for seafood policy. It is a highlight of my life to be called upon to bring together top researchers in the natural and social sciences as well the humanities.  I believe the report shows huge benefits to society, economy and marine ecology.”

Carlos Moedas, Commissioner for Research, Science and Innovation, added: “This substantive opinion and comprehensive evidence review shows that the Commission’s Scientific Advice Mechanism is going from strength to strength. I am confident that the value of this opinion will be recognised not just by European policy makers, but also by national governments and all those who care about the future of our oceans.”

As part of the European Commission's Scientific Advice Mechanism SAPEA was asked to produce the report to underpin the Scientific Opinion of the High Level Group in response to a request from Karmenu Vella, European Commissioner for Maritime Affairs and Fisheries to advise on the question: “How can more food and biomass be obtained from the oceans in a way that does not deprive future generations of their benefits?”

Professor Günter Stock, 2017 Chair of the SAPEA board also commented: “Interdisciplinarity and world class expertise from across Europe are SAPEA’s core strengths, and this report has successfully incorporated these under the leadership of Academia Europaea. I look forward to SAPEA’s future collaborations with the SAM High Level Group, ensuring that scientific advice is informed by expertise from academies across Europe.”

Professor Sierd Cloetingh, President of Academia Europaea added: “In Food from the Oceans, we believe we have established an attractive model for future SAPEA projects.  I would like to thank the academies across Europe and their experts who have contributed their valuable knowledge to this report. I express my gratitude to everyone involved in making Food from the Oceans a success, ensuring that the Evidence Review Report was delivered on time and to an excellent standard.”

The full report can be viewed here: https://www.sapea.info/sapea-provides-evidence-for-the-european-commission-on-food-from-the-oceans/

Spanning the disciplines of engineering, humanities, medicine, natural sciences and social sciences, Science Advice for Policy by European Academies (SAPEA) brings together knowledge and expertise from over 100 academies, young academies and learned societies in more than 40 countries across Europe. SAPEA is part of the European Commission Scientific Advice Mechanism (SAM), which provides independent, interdisciplinary and evidence-based scientific advice on policy issues to the European Commission. SAPEA works closely with the SAM High Level Group of Scientific Advisors.