Membership of the Royal Irish Academy is the highest honour that can be attained by scholars and scientists working in Ireland. It currently has 385 Members from across the island of Ireland who are elected in recognition of their academic achievement.

“It gives me great pleasure to welcome these outstanding members to the Academy,” said Professor James Slevin, President of the Royal Irish Academy. “Throughout its history, the Academy has recognised the scholarship and public contributions of the leading thinkers in Ireland. I am confident that these new Members will continue that tradition of developing Ireland’s intellectual culture, which is so vital to our continued success in today’s knowledge society.”

Prof Ruth Byrne is Vice-Provost of Trinity College Dublin and Professor of Cognitive Science. She is the author of The Rational Imagination: How People Create Alternatives to Reality.

Prof Samson Shatashvili is Chair of Natural Philosophy and Head of the School of Mathematics.

The youngest of the new RIA members elected is 38- year old economist, Professor Philip Lane who in 2001 was the inaugural recipient of the German Bernacer Award in Monetary Economics for being ‘the most outstanding young monetary economist in the eurozone’. He is currently Professor of International Economics and Director of the Institute for International Integration Studies (IIIS) at Trinity College Dublin.

Both Prof John Bartlett (School of Religions and Theology) and Prof Victor Dixon (Department of Hispanic Studies) are Emeritus Fellows of the College.

The twenty-four new Members enrolled are:

Those elected are entitled to use the designation ‘MRIA’ (Member of the Royal Irish Academy) after their name. 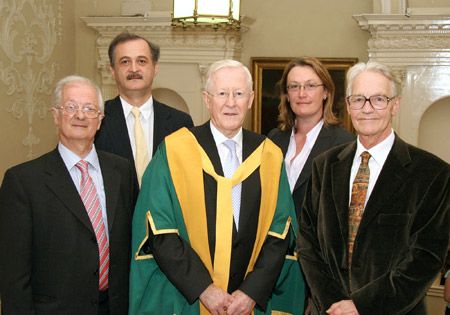