Trinity’s leading researchers and inventors were today recognised for their innovative research and entrepreneurship at the 2021 Trinity Innovation Awards, which were deferred from last year due to the COVID-19 pandemic. John O’Leary, Professor of Pathology, received the headline Provost Innovation Award.

Professor O’Leary, also Consultant Pathologist at St. James’s Hospital, and Director of Pathology at The Coombe Women and Infants University Hospital, leads an investigator group at Trinity, which has established an international reputation in the area of virally driven cancers, particularly cervical, ovarian, prostate, head and neck.

“I am delighted to present Prof. John O’Leary with the Provost’s Innovation Award. John is one of Ireland’s leading clinicians and is absolutely passionate about his research. The technologies that have emerged from his work have changed people’s lives.

“I warmly congratulate all the winners and nominees drawn from a range of disciplines including law, botany, computer science, economics and pharmacy. Trinity research is delivering creative solutions in areas such as flooding, housing, neurodegenerative diseases, crop yield and deaf studies.

“I would also like to thank Trinity Research and Innovation (TRI) for hosting this awards event, which celebrates the success of our researchers and demonstrates the value of TRI’s technology transfer expertise.”

“At this year’s event, we again celebrate our colleagues whose innovative research has led to commercial success by collaborating with industry in transferring knowledge, expertise and intellectual property or by exercising their entrepreneurial skills in the formation of investible spin out companies, with 28 former spin out companies continuing to prosper.”

Mr Hobbs went on to say that Trinity Campus Companies continue to perform exceptionally well in achieving high performing startup status due to their ability to attract significant levels of venture capital, raising over €200m in the last three years while creating high value jobs. Trinity is Ireland’s leading university in this regard, producing 25% of all such companies from across the 3rd level sector.

Mr Hobbs welcomed the two new awards this year, one which recognises those academic colleagues who engage in the transfer process via consultancy and the other which recognises the the outstanding contribution of an individual in an enterprise partner for consistently collaborating with Trinity to drive effective innovation output. He congratulated Mr Jamie Cudden of Dublin City Council for receiving this inaugural award. 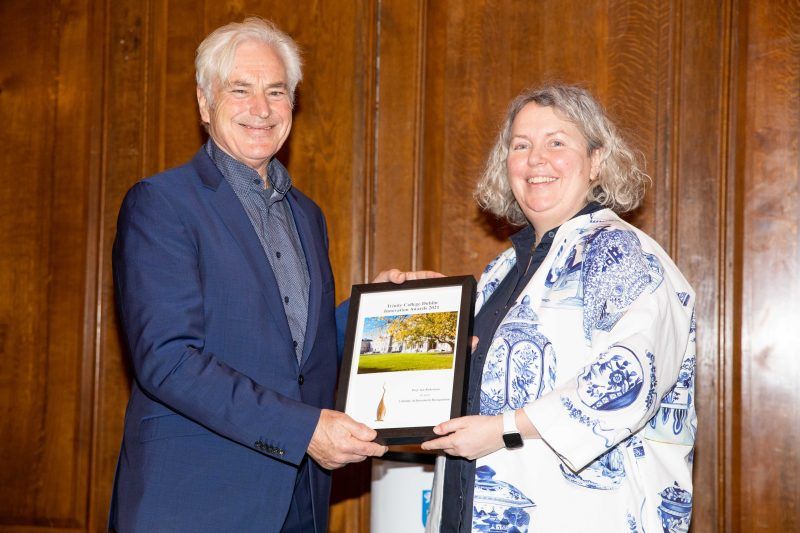 Professor Robertson is the founding Director of the Trinity College Institute of Neuroscience and served as Trinity’s Dean of Research between 2004 and 2007.

He is known internationally as a highly engaging author and excellent science communicator and, as Co-Director of GBHI, he is helping to protect the world’s aging populations from threats to brain health.

Helen Sheridan, Mary Bourke and Ronan Lyons were winners in this category, having led research that has made a significant impact for the wider world.

Helen Sheridan, Associate Professor in the School of Pharmacy and Pharmaceutical Sciences, is co-founder and academic co-director of NatPro, the Centre for Natural Product Research at Trinity, and was co-founder of campus company Trino Therapeutics. In 2019, she was awarded a €6 million philanthropic donation to harness the untapped therapeutic and commercial use of native Irish bog plants, distinctive Irish bog waters and the microbiome of unique bogland species. The project focuses on conferring socio-economic, ecological and educational benefits to local communities and nationally.

Mary Bourke, Associate Professor in the School of Natural Sciences, was recognised for her work as a consultant to advise on alleviating future flood damage. Working through Trinity’s consultancy office, CONSULT Trinity, she applied cutting-edge academic expertise to demonstrate how Inishowen Rivers Trust could use the natural landscape to reduce the risk of flooding. Professor Bourke worked with IRT and local community to determine specific measures for implementation.

Ronan Lyons, Associate Professor in Economics and Head of the Trinity Research in Social Sciences (TRiSS) centre, is a leading academic in the area of housing in Ireland. He is recognised for the socio-economic impact of his work, such as a recent consultancy project with Facebook, which included a report on why middle-income populations in Ireland cannot afford to buy a house, particularly in Dublin.

Gavin Doherty (SilverCloud), Julie Kelly (Neuropath) and Graham Cross (Adama) were winners in this category, having played a pivotal role in founding an investable, scalable campus company with high potential.

Gavin Doherty, Associate Professor in the School of Computer Science & Statistics, was the driving force and leader of the research project that led to the formation of SilverCloud health. He also built the unique team of researchers and entrepreneurs that made the company—recently acquired for €320 million—highly investable.

Julie Kelly, Research Assistant Professor in the School of Medicine, is the Founder and CEO of Neuropath Therapeutics, a Company focused on developing an innovative drug treatment for neurodegenerative diseases, such as Alzheimer’s disease and Motor Neuron disease. Neuropath’s approach is founded on Dr Kelly’s ground-breaking discoveries, made through her Welcome Trust-funded research at Trinity.

Graham Cross, Associate Professor in the School of Physics, and a PI in the SFI Centre for Advanced Materials and BioEngineering Research (AMBER), is an expert in material science and nanomechanics. He developed technology and raised investment to create Adama Technologies in 2013 and acts as CTO for the company, which has grown to 5-6 employees and has a revenue exceeding €1 million/year.

Inventors and Ones to Watch

Trevor Hodkinson and Brian Murphy, and Matthew Campbell were winners in the Inventors category for research that led to the creation of intellectual property and has subsequently licensed to Industry and/or campus companies.

Trevor Hodkinson and Brian Murphy, Professor and Research Fellow respectively in the School of Natural Sciences, are the inventors of two patent families (both joint with UCD) that protect microbial technology intended for agricultural use, primarily as seed coatings to increase crop yield. These patents and a significant biobank of over 200 identified endophyte strains developed by the Trinity team have been exclusively licensed to a new joint Trinity-UCD company, CropBiome.

Matthew Campbell, Associate Professor in the School of Genetics and Microbiology, focuses primarily on the molecular biology and physiology of the vasculature associated with neural tissues. He founded Exhaura in 2019, which is an ophthalmology gene therapy company with an initial focus in glaucoma. He has numerous current industry collaborations, has 16 IDFs and is named as an Inventor on 10 patent families.

Rocco Lupoi and John Dinsmore were winners in the Ones to Watch category, noted as entrepreneurial academics whose research is most likely to result in the next Campus Company, commercial license deal or industry engagement.

Rocco Lupoi, Assistant Professor in the School of Engineering and an investigator in AMBER, has worked closely with Irish SMEs on projects utilising the Cold Spray technology he brought to Trinity. He is currently working on an Additive Manufacturing spinout.

John Dinsmore, Ussher Assistant Professor in the School of Nursing and Midwifery, focuses on advancing integrated health and social care via digital health interventions. John has developed a novel digital platform – ProACT – to support individuals self-managing their health and well-being at home.

Danny Kelly and Anne-Marie Healy were recognised for their outstanding achievements in successfully building relationships and collaborating with industry.

Danny Kelly, Professor in the Trinity Centre for Biomedical Engineering and AMBER, is the recipient of four European Research Council awards and has secured over €18 million in research funding. He leads a multidisciplinary musculoskeletal tissue engineering group and has numerous partnerships and collaborations with industry, including with DePuy Ireland Unlimited Company and Johnson & Johnson Services, Inc.

Anne-Marie Healy, Professor in the School of Pharmacy and Pharmaceutical Sciences and a PI in AMBER, has been awarded €10 million in competitive grant income and has a record of prolific industry engagement with pharmaceutical companies including: APC, Xeolas, IVAX Pharmaceuticals, Merrion Pharmaceuticals, Velox GmbH, Amebis, Solvotrin Therapeutics, Pfizer, GSK, Merck etc.

David Taylor and Lorraine Leeson were recognised for their outstanding contribution in transferring knowledge to an enterprise partner via the Consult Trinity programme.

David Taylor, Professor Emeritus in the School of Engineering, focuses on the material behaviour of a variety of biological materials such as bone, insect cuticle and plant stems. He has worked with medical device companies on design and manufacturing issues, and personal care companies on the development of new products to prevent splitting hairs. He has also carried out numerous forensic investigations of component failure to assist the Irish courts. He is a great supporter of CONSULT Trinity and provided invaluable advice to the Office on developing the service offering PIs as Expert Witnesses.

Lorraine Leeson, Professor in the School of Linguistic, Speech and Communication Sciences, was recently appointed as the Associate Vice Provost for Equality, Diversity and Inclusion.  She has led on three different consultancy projects – with An Garda Siochana, the Irish Deaf Society, and most recently with the Sign Language Interpreting. The impact of Lorraine’s work is particularly impressive as it highlights ongoing inequalities experienced by the deaf community, both in Ireland and internationally.

Jamie Cudden was the winner in this category, which is a new award this year, for his contribution as an enterprise partner in consistently collaborating with Trinity to drive effective innovation output.

Jamie has been a key driver of the award-winning Smart Docklands partnership between Dublin City Council and the CONNECT Centre at Trinity. He has also co-led the Academy of the Near Future smart city education programme with CONNECT.

Jamie’s vision and leadership has transformed Dublin City Council’s approach to technology innovation and technology adoption and they are now very much recognised as leaders that others (municipalities, companies, researchers) around the world look to for inspiration and guidance.

In addition to the award winners, CaliberAI, Parvalis TX, Vertigenius, CropBiome and Biologit MLM-AI were all featured as exciting new companies that spun out over the past 12 months or so.

CaliberAI provides digital tools to support publishers and platforms, by detecting potentially defamatory or harmful text, and reduces the risk of publication of such material.

Vertigenius is a platform that lets users design, prescribe and deploy custom exercises in a clinician portal.

Biologit MLM-AI is an artificial intelligence-powered productivity software for professionals dealing with high volumes of scientific and medical abstracts and articles from the literature.