The first in a series of annual public lectures at Trinity College Dublin, the Kirker Memorial Lectures, named in honour of the pioneering epileptologist and Trinity College Dublin graduate Dr John Kirker (1922-2011), was delivered earlier this month by Professor Tony Marson, Professor of Neurology at the Walton Centre at the University of Liverpool and Director of the UK Epilepsy Research Network.

Dr Kirker was a Trinity College Dublin graduate and Consultant Neurologist in Sir Patrick Dunn and Beaumont Hospitals. He was a founder of the Irish Epilepsy Association (now Brainwave), and was instrumental in the development of proper clinical services for people with epilepsy in Ireland, including instituting and managing the first lectroencephalographic (EEG) equipment in the country. Dr Kirker cared deeply about Trinity and its reputation throughout his life. He left a bequest to fund an annual lecture in epilepsy, aiming to inspire interest in the study of this condition. 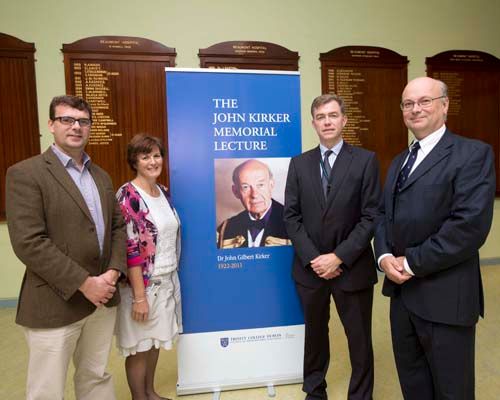 Professor Marson, who delivered the inaugural lecture entitled: NICE epilepsy guidelines, quality standards and national audits: How are we doing? is an expert in assessing interventions and factors that influence outcomes in epilepsy.  He has lead the two largest investigator lead multicentre randomised epilepsy trials in the UK – one to determine the best management of early epilepsy, and another on the benefits of standard versus new drugs for epilepsy. He is also a leader in the international Epilepsy without Walls programme that aims to identify causative genes in common forms of epilepsy.

Commenting on the Trinity College Kirker lecture series, Dr Colin Doherty, Consultant Neurologist of the Academic Neurology Unit, Trinity College Dublin and HSE Clinical Lead in Epilepsy, said: “It is a great privilege to have Professor Marson deliver the John Kirker Memorial Lecture. Professor Marson embodies all of the attributes of the late Dr Kirker – clinical excellence, scientific rigor and an intense drive to improve the standard of care for people with epilepsy.”